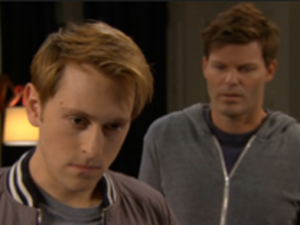 What I can do for Pine Valley. (TOLN/Hulu)

A lot of noses are out of joint over some of the latest developments. More intrigue in the search for Cassandra and corporate drama came to Pine Valley this week.

House calls.
Cara was making house calls and not in the capacity of a doctor. It’s uncertain what her specialty is but physical therapy isn’t her trade. As much as a Cara and JR pairing might be nice, this is a stretch. JR really needs to get his butt to the hospital for therapy and bump into David more so we can watch that drama.

Parenthood.
There are some nice storylines going on between Miranda and Bianca and AJ and JR, not to mention the influence of JR’s own relationship with his parents affecting his struggles with AJ. JR may have a history, but for AJ’s sake it would be nice to have things work out for JR so he can become a better parent. The question of whether history will repeat itself is irrelevant. Someone just needs to give the man a chance. After Wednesday’s episode it seemed apparent he really would like to be a better father. It looked like AJ got that message and is reconsidering things himself.

Dr. David Hayward, Entrepreneur Extraordinaire.
Dr. Joe Martin is no friend to Dr. David Hayward and shut the door on any medical breakthroughs because of it. He's not afraid to threaten calling security either so David better start looking for some new digs outside of the hospital. He might have found them at Opal's. People in Pine Valley need to lock their doors. David went the extra mile in creepiness this week though when he held a press conference and announced all he would do for Pine Valley while partnered with Cortlandt Electronics.

Pine Valley Hospital.
Cara talked too much about her personal problems at work again. Although there are never more than two people in that locker room someone usually finds a way to interrupt and hear something they shouldn't. She widened the circle of people who knew about her child which means David will know about it soon. I wonder if Angie will tell him if she hears about it from her old friend Dr. Joe.

Looking for Cassandra.
Pins and needles is the name of the game as we wait for Cassandra's rescue. Billy Clyde did seem to be the one very interested in taking down the competition. Why is it that PV's finest is a few steps behind?

Check out the latest AMC Soap Digest for an update on Prospect Park's new programming schedule.