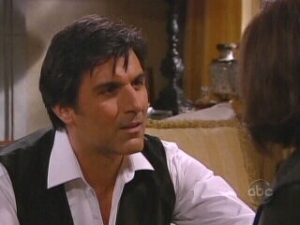 Josh is out of his mind! (Soaps.com)

Happy Friday, everyone! You know what I love about winter? Bundling up inside, watching the snow fall – and watching some great soap opera drama. Why? Because for every tried and true storyline twist, there is a breath of fresh air. We certainly had some tried and true moments but we also had a few breaths of fresh air this week…at least I think so!

Okay, ignore the fact that Josh is now blaming Zach for the tornados and wants revenge because that part doesn’t make sense. Focus on the fact that Josh wants revenge on Zach. Why? Because Zach has everything Josh doesn’t. Think about it this way: Josh has always wanted acceptance but no one would accept him because of who his father is/was. Zach not only has acceptance, despite of his and his father’s wrongdoings, he has the respect of the community. He has family support (something Josh has always begged for), he has a great love (Babe kicked Josh to the curb) and he has money (Josh nearly got killed for embezzling from Zach).

You know what I think? I think the tornado/Kendall’s coma is just an excuse for Josh. He’s had it. He wants respect, he was love and he thinks money is going to get that for him. Killing Zach, in my opinion, isn’t a means to an end, it’s a way of killing the part of himself that no one will accept.

And I love it! Seriously. ***Spoiler Alert*** I don’t want to see Colin Egglesfield leave the show, but the character of Josh never made sense. They unaborted Erica’s child? That’s just a travesty beyond measure. I would rather have them find out that Madden lied about the unabortion and that Josh isn’t biologically a Kane. That’s what I’d like to happen, but that isn’t going to happen. So killing off Josh is the only way to right this wrong.

And on the subject of Erica and the decisions she’ll have to make, I thought it was high time we revisited the scene of Kent’s death – by Erica’s hand!

Did anyone else want to strangle JR and pat him on the back at the same time when he stood up, drunk, in court and raged on about Krystal’s infidelity? Yeah, it could have hurt Tad’s chances but it didn’t. It may hurt his chances at keeping Little A, but we knew that battle wasn’t nearly over, anyway. I love that JR’s filter has been taken off by the booze (that is the only good thing about him drinking) because someone needs to tell Krystal the blunt truth and not let her wriggle out of it. Seriously, if she blames her affair with David and her drug addiction on her grief one more time I’m going to lose it. Tad tried to help her. Opal tried. JR and Adam and Colby tried. Angie tried. She ignored everyone – including her children! – in favor of David and his drugs. The chick needs some help and maybe now she’ll get it.

And now that she's out of the picture, I want to know what is next for Tad the Cad – and I really, really hope they bring back The Cad! Tad is absolutely the best when he's romancing a woman, being sarcastic and loving life. He's lost Dixie, he's a single father but he can still have a good life.

Annie and Aidan vs. Ryan and Greenlee

You guys know I love Annie. You also know I place some of the blame for her condition on Ryan. That hasn't changed, except for one teensy little thing: Greenlee! The more this storyline plays out, the more convinced I am that Greenlee is a huge factor in Annie's instability. At every turn she is showing up around Annie and usually with Ryan in tow. What sincere woman does that? In my opinion Greenlee isn't trying to make peace with Annie, she's trying to keep her on the crazy side sot that she'll never be released from Oak Haven. Thursday's show was clear on that because, to the naked eye, Annie's apology was sincere (yeah, we know it wasn't). Even Dr. Sinclair thought Annie was making progress and uneducated Greenlee says Annie is more wacko than ever? What school did she attend to get her Master's in Psychology?

Dr. Sinclair still has me flummoxed, by the way. I want to know why she is so adamant about Annie regaining her memories and being sent to prison. I want to know what – or who - she is connected to in Pine Valley and I wanna know now! There is something a little bit too sneaky about her for me to believe she is altruistic or that she just wants to help. Nope, something more is going on here!

Somebody has me a Bloody Mary when these fiasco's of marriages are over. Yeah, I said it. Ryan and Greenlee aren't the supercouple I want to see married on Valentine's Day. Neither are Bianca and Reese. First, Bianca needs to really deal with her insecurities and until she does she shouldn't be marrying anyone. Second, after Ryan's housecleaning to dispose of Annie's belongings for Emma's benefit, he doesn't deserve happiness, either. He deserve a little bit of torturing. Oh, wait, he's marrying Greenlee. That should be torture enough!

Now that Tad's back, we're hearing a lot of zingers between him and Adam and I have a feeling those great one-liners are going to continue. And it can't come fast enough for me! With that in mind, here are the lines of the week – at least in my opinion!

David to Krystal, "I'm doing all of this for you and for Babe. I love you."

Ryan to Greenlee, "I'm boxing up Annie's things so that Emma isn't confused."

Tad to David, "You took Dixie from me but I'm giving you Krystal!"