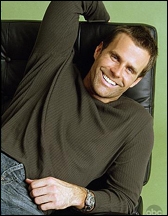 Add another listing to the resume of All My Children’s Cameron Mathison (Ryan Lavery). The soap star has signed on to be a correspondent for the ABC’s “Good Morning America”!

As fans know Cameron starred on the 2007 season of “Dancing with the Stars“, he has also held many hosting gigs including the game show “Your Place or Mine?”, “Entertainment Tonight” and has co-hosted “Live with Regis and Kelly”. He also hosted the SOAPnet realty show “I Wanna Be A Soap Star”.

Don’t worry, fans, this new hosting gig doesn’t mean Cameron is going to leave Pine Valley for warmer – or colder! – climates. He is simple spreading his wings a bit. And, since “Good Morning America” is based in New York, as is AMC, he won’t be flying cross-country constantly as he did while starring on”Dancing with the Stars“.

Cameron is also hosting the annual Broadway Cares/Equity Fights AIDS event on March 9; several soap stars will be performing at the event. You can read more about that event by clicking here.