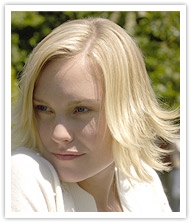 Hey there, fans, Soaps.com has done a little digging to get you updated on a few of your favorite former Pine Valley-ites!

First up, Laura Allen (ex-Laura English). Since leaving Pine Valley in 2002, Laura has made quite a name for herself in Los Angeles! She starred in the USA hit “The 4400”, appeared in the Julia Roberts film “Mona Lisa Smile” and is now set to star opposite one of the Doctor’s McDreamy on “Grey’s Anatomy”! Soaps.com has also learned that Laura will appear in three upcoming films in 2009: “Old Dogs”, “Hysteria” and “Cherry”. Wow! She’s been a busy girl! On a personal note, Laura and husband Bruce Weyman had their first child in September, a boy name Harper Edward Weyman. Congratulations!

Christopher Kennedy Lawford (ex-Charlie) continues to be a sought after actor, but since leaving Pine Valley in 1997, he has also become an author! Christopher’s first book “Symptoms of Withdrawal” told the story of his addiction; now he has released “Moments of Clarity: Voices From the Front Lines of Addiction and Recovery”. The new book is a collection of stories about addiction. You can buy the book by clicking here or by visiting your local bookstore.

Finally, Brian Lane Green (ex-Brian Bodine), is starring in “Singing Down the House” at the Gulfshore Playhouse at the Norris Center in Naples, Florida! Brian will be singing cabaret style with Johnny Rodgers on January 16 and 17. He will also perform at the “3 Men and a Baby Grand” show at Sanibel Island on January 27. Since leaving Pine Valley, Brian has been nominated for a Tony Award for his role in “Joseph and the Amazing Technicolor Dreamcoat” on Broadway! Congratulations, Brian!

Is there a star that you’ve been missing? Ever wonder what happened to stars from years ago? Drop us a note here and we’ll see if we can track down a few of your favorite actors and actresses from All My Children.