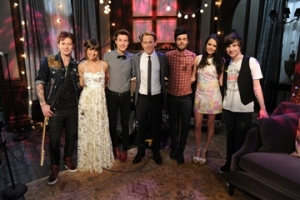 We’re less than a week away from the online premiere of “All My Children.” This week’s digest shares honors for the driving force behind the happenings in Pine Valley, some advice on how to watch your stories online and news of recent and upcoming soap star visits to television.

ABC in legal troubles with Prospect Park:
ABC found new ways to create drama when it killed three "One Life To Live" cast members. Currently ABC faces a lawsuit filed by Prospect Park over the matter.

Former AMC star promotes Rectify.
Abigail Spencer was on Jimmy Kimmel Live on Monday April 23 and shared how she was discovered by Regis and Kathy Lee who got her recognized and later cast as Becca Tyree on "AMC." She currently stars on the new series "Rectify" airing on Sundance Monday nights at 10:00 PM.

TOLN stars on The View.
Catch "AMC" stars Vincent Irizarry (Dr. David Hayward) and Thorsten Kay (Zach Slater) on "The View" Thursday April 25. Find out which OLTL legend will be on The View with them.

Vincent shared a photo from the set of "AMC" yesterday of him and the love of his life.

Save the date!
"AMC" may not air on Fridays but "More All My Children" will. The informational weekly show recap is set to start airing on May 3 and will include a behind the scenes look and cast interviews.

A message from Cady McClain's Suzy Homemaker:
Suzy Homemaker (Cady McClain, who plays Dixie) tells soap fans how to watch all the cute hotsy totsy folks on "All My Children" on Hulu on their computers or smart phones. Like Suzy says, "It's not Rocket Science."

AMC History:
Pine Valley may be void of Erica Kane but Brooke English will be around even if things don't pick up where they left off. Their age-old feud had a bit to do about men over the years including sharing two husbands and Brooke having a couple more flings with men from the Erica Kane man pool.

Please join us every Tuesday for a new "All My Children" Soap Digest and read the updated All My Children spoilers for Pine Valley which includes the first video teaser for the reboot.