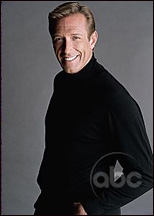 If you’ve seen All My Children’s Walt Willey (Jackson Montgomery) on stage, then you know just how talented he is! Now, Walt is headlining his own comedy tour! The “No Soap, No Opera” Comedy Tour debuts in Illinois (Walt’s home-state) on January 17!

Kim ‘Howard’ Johnson will also be part of the show, which opens at Grizzly Jack’s Grand Bear Resort in Utica.

If you love Walt’s comedy and think you’ve got a funny bone of your own to share, mark down the date – because you could be cast as an improvisational actor during the tour!

As part of the tour Walt and Kim, who are childhood friends, will also host a comedy boot camp. Their Improvisational Comedy Seminar will begin at the Grand Bear Resort in February; the goal of the seminars is to help aspiring comedians. Walt and Kim will also be casting a troupe of improvisational actors who will then begin performing at the resort! How great is that?

The improve troupe reviews begin the weekend of February 7 at the Grand Bear Resort.

Good luck with the new shows – and the troupe casting! – Walt, from Soaps.com!