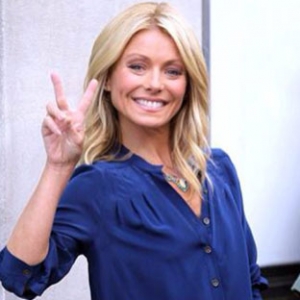 Soaps.com’s back with an update about what time “All My Children” is going to air, how Canadians can watch the show, where to send the studio and actors fan mail, and we’ve also caught up with a few actors who are busy with new films.

What time during the day is AMC on?
Fans can tune in on April 29, 2013 at 12:00 PM on Hulu and iTunes to watch the first episode of “AMC.” Find out how many episodes TOLN will produce each year and how long the commercials will be for “AMC” in our All My Children Migration News.

Soaps.com has some great news for Canadian viewers!
For those who didn’t already download an add on to watch the show on Hulu, TOLN has another option. They partnered with FX Canada to bring Canadians new episodes of “AMC” on television April 29. Find more details about watching AMC in Canada such as the time, and where to watch. Vote to tell Soaps.com how you plan on watching AMC.

Rippa on her former co-star, Regis Philbin.
The Hollywood Reporter spoke with Kelly Rippa (ex-Hayley) and her husband, Mark Consuelos (ex-Mateo) in an interview a few days ago about politics, her co-host Michael Strahan on “Live!” and the actress/television host admits Strahan and her former co-host Regis Phibin are similar. “Well they’re both incredible storytellers,” Ripa said, “They are both fiercely competitive, and they’re both incredible football players.” Football players?! That last bit was a joke, of course, but she also admitted she doesn’t keep in contact with her ex-co-star, Philbin.

Watch the video to catch up with Rippa:

How do I contact All My Children?
Such a popular question and Soaps.com took it to the reps at The Online Network who gave us an address where our readers can send fan mail to the show and the actors.

Casting calls.
We’ve recently updated our AMC comings and goings page. Find out which big name actress is coming to us from the “Harold & Kumar Go To White Castle” films and our beloved defunct soap, “Guiding Light.”

Working on the show was a learning experience.
You may remember this actress, director, and producer easily from her stint as Marcy D’arcy Rhodes on “Married With Children,” but Amanda Bearse also played Amanda on “All My Children” from 1982- 1984. Bearse recently did an interview with Watermark Online where she reminisced mostly about her time on “Married With Children,” but the actress said this about her time in Pine Valley, and described her four-year stint on ‘All My Children’ as an extraordinary learning experience. “You’re acting every day,” Bearse said. “It’s the closest thing to repertory theater you can find in television.”

The Concerto.
Jennifer Bassey who played Marian recently played Linda Davis Thompson in “The Concerto,” alongside Janel Parrish (“Pretty Little Liars”) and Jackson Rathbone (“Twilight”). The film started production December 2012 and is summarized as being about a young musician who moves across the country to Los Angeles and into a house where she meets the perfect man – a ghost who died in 1969.

Glass Chin.
Elizabeth Rodriguez (ex-Carmen) (see inset left) filmed "Glass Chin" as Rita Sierra this year about a former light welterweight champion who retires early from boxing but after an unsatisfying life out in New Jersey, he heads to Manhattan to reclaim his glory and lend his name to a shady restaurateur. When he's framed for murder, he's forced to make a choice between ambition and friendship. The show is in post-production.

Soaps.com's top 10 reboot wishlist!
We're not only counting down to April 29, but we've made a list for what we are most looking forward to seeing. Aside from wanting to know who JR shot, take a look at the rest of All My Children's Top 10 Reboot Wishlist. What's on your wishlist? Leave us a comment!

Pine Valley Spoilers!
We'll be back in Pine Valley April 29 at noon but for those who can't wait to find out what's to come, Soaps.com has a few teasers for the first week in our All My Children spoiler page.

The Online Network posted this gem...

AMC Trivia:
The Paley Center for Media is commemorating key dates in media history with clips from their collection. Their website boasts that they have "everything from President Kennedy’s assassination (November 22, 1963) to Sammy Davis, Jr. smooching with Archie Bunker (February 19, 1972) to Kelly Clarkson being crowned the first ‘American Idol’ winner (September 4, 2002). To soaps, one of the most fun clips they have been showing is a 1983 clip of Vera Vanderbilt (Carol Burnett) meeting Verna Crumbs (Elizabeth Taylor) at a party. Watch the clip on The Paley Center’s website of Burnett and Taylor on AMC.

"I think that woman’s pilot light is out." – Vera Vanderbilt.

The countdown resumes!
The countdown is now at 13 days to go and we're thanking fans for taking to Twitter to share posts such as this with other fans.

Nice ALL MY CHILDREN fave reboot & related countdown site.PLUS a chance to vote for Bianca at the bottom!soaps.sheknows.com/allmychildren/…

Find out what the One Life To Live actors are up to in this week's OLTL Soap Digest.