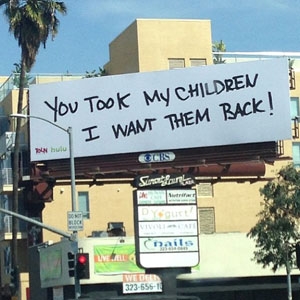 This week, a few “AMC” alums are busy with new films, we’ve a surprise for fans to watch the show earlier, a contest, and find out which big star joked about the media writing her akin to Erica Kane! The countdown begins with 20 days to go…

New billboard lures in fans.
The Online Network set up a billboard advertising for the return of our soap which reads, “You Took My Children I Want Them Back!” A clever way to get folks gazing at the billboard which was found on the corner of Laurel Canyon and Sunset Blvd. in Los Angeles, CA.

Body swap!
Chrystee Pharris (“Passions”) and Lindsey Santefort (“All My Children,” “Castle”) star in “The Takeover” which is the story of best friends Ashley (Santefort), a Caucasian fashion designer, and Tisha (Pharris), an African American comic book artist who debate the difficulty of dating. Each argues that the other has it easier. After help from a friend, the ladies trade places and for 24 hours, they experience the dating scene in each other’s shoes. Watch it here on Soaps.com:

THE TAKEOVER from Shequeta Smith on Vimeo.

Preview AMC before anyone else!
Mark the date: Thursday April 25 Z100 will be launching a special event celebrating the relaunch of “All My Children” and “One Life To Live” in New York City. They’ll be giving fans a chance to preview the premiere episodes of the shows before anyone else sees them, fans will meet some of their favorite cast members and sit in for a special, intimate Q&A session, those living in the NYC area have the opportunity to enter for a chance to be in their audience for the show – plus, one lucky audience member will win a walk-on role! The event will be streamed live on Z100’s site starting at 7:00 PM ET.

Z100 is collecting questions online at Z100 now from fans for the Q&A session.

'Why waste one more minute of your life waiting to live it?'
Tamara Braun (ex-Reese Williams) will play Candace in "Pretty Rosebuds," a feature film about a woman trapped in an unhappy marriage. While Cecilia 'Cissy' Santos wants to be the perfect wife, she struggles with her religious beliefs and sexual desire for someone else. Her marriage unravels when her struggle ends up with her forsaking her marital vows. The film is in post-production and is set to be released in June.

Katy Perry comparing herself to Erica Kane!
The media always builds up stories in order to pique the readers' interest. It's an unfortunate part of being a celebrity. Katy Perry pokes fun of what the media is writing about her lately in a tweet.

First I'm pregnant & then I'm divorced. What am I All My Children?! #ericakane #pshhh #ifihadadollarforeverytime ...

Eden Riegel teases what's to come.
Access Hollywood spoke with Eden Riegel (Bianca, "AMC") about picking up a few years later, the fallout, and Erica Cane. "Access" asked, "The last time people saw ‘All My Children,’ J.R. Chandler had a gun, and he was hiding behind the walls as most of the residents of Pine Valley were gathered together. What can you tell us about where the show picks up?" Eden Riegel teased, "That final cliffhanger has definitely affected — it’s ricocheted and affected people’s lives and Miranda and A.J. who were just little kids at that point are now teenagers and dealing with the fallout themselves." As for Erica's absence, "Access" asked if they explained it away. Riegel says, "No. I think in a good way... there isn’t a lot of time on like, ‘Oh, where’s so and so? You remember she’s out of town doing this...’ They don’t spend a lot of time on the exposition of that stuff so what you end up getting is the feeling that those people still are present. They’re just not featured."

Casting call Alert!
"AMC" has a casting call out for Andres. Find out a little about Andres' past and where he'll be hanging out in Pine Valley in our All My Children comings and goings.

Tear-jerker promo!
The Online Network released a promo video for "AMC" which provides a walk down memory lane and gives a bit of a tease of what's to come on April 29. A word of caution: Tissues are recommended during viewing.

Find out which past OLTL actress Soaps.com interviewed about her new gig and be sure to bookmark the updates from Prospect Park for AMC & OLTL.