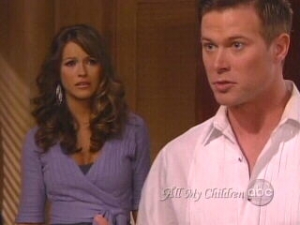 One week into the New Year and I have to ask: Where is Tad? Where is Kendall? At the rate most Pine Valley residents are going, these two are the only sane ones left!

Krystal had me. Really and truly. On Thursday’s episode when she was finally opening up to someone (Opal) other than David she really and truly had me on her side. I saw her grief. I saw her desperation and her despair. And then she killed it. Blaming Tad? What?!? Before Christmas Tad begged her to talk to him about Babe or to allow him to help her with renovations on The Comeback or anything else that would help her deal with the grief. She turned him down flat! And now she tells Opal that she turned to David for help with the bar because no one else was around? She said she couldn’t talk to any of her friends because they were too judgmental of her grief? What?!? At what point was anyone anything but supportive?

Two Weddings and A Crazy Bride

Wow, is Bianca turning into Bridezilla or what? Listen up, Binks, When Ryan tells you something is a bad idea, it has to be really, really terrible. Stop looking for problems. Start believing in Reese and move forward with your life! I’m not crazy about the closeness between Zach and Reese, either, but she is obviously in love with you.

In the other wedding, I’m actually glad Ryan has convinced Greenlee not to think about Opal’s dire predictions. I don’t want either one of them dead, but I’d like their day to be ruined after all the things they’ve done to Aidan and Annie. Seriously, they both deserve a little heartache – and what’s with planning a wedding in a month when your divorces aren’t even finalized? I know this is Soap Opera Land, but come on! Let the ink dry, people!

Doesn't Anyone Go To Work?

Okay, I'd like to know what is going on with Chandler Enterprises, New Beginnings, Fusion. . .You name it, I want to know. As far as I can see, not one person has been to work since Christmas! Erica is the only person to even mention work, but then she was trying to get under Greenlee's skin and didn't follow her own advice – to go to work! The recession must be avoiding Pine Valley like the Plague!

I love Jacob Young (JR Chandler). Seriously. I. Lurrrrve. Him. He's awesome. Even in his state, I can still see his grief over Babe. I can hear the love in his voice when he says her name. I can understand why he's turning to alcohol; I don't agree with it and I know he's being pushed there but I can totally empathize. So kudos to Jacob! And while I'm at it, kudos to Chrishell Stause (Amanda Dillon). She's made me almost-hate Amanda and I'm a total Amanda fan!

Seriously, I hate what Amanda is doing to JR. I just don't get it. Know she's been wronged in her life; I know she thinks lack of money is the root of all of her problems. But JR has been the one person not to treat her like total trash and she's doing this to him just for money? She's already showing her remorse. She's trying to get him off the booze but she's going to have to do a lot more to redeem herself, at least in my book!

The writers really put their writing hats on this week, fans. The drama is definitely heating up. My favorite lines of the week?

Erica to Greenlee, "I've moved my offices back to Fusion. Stop by sometime - if you can find the time!"

Krystal to David, "I don't want any more of your milk, I don't want your drugs, just get out!"

David to JR, "You're daddy rang the bell and you came running like Pavlov's slobbering dog!"

But the best line had to be from Opal. As she was listening to Krystal's bogus explanations, she called her on everything with one line:

Opal to Krystal, "While Tad's been riskin' his life for his family you've been off galavantin' with Dr. Evil!"

All My Children Stars' Wedding...