Finally we get some real emotion from Krystal and then she blows it by seeming to be caught up by David's 'love'. Yeesh! Krystal needs to get a clue. A big one. You know David's been drugging you, Chica, you know he's a master manipulator and still you can't look him in the eye and tell him to get out? She's a lost, lost soul. Dang Babe for dying, anyway, because pre-death-Krystal would never have stood for what David is doing.

Call me crazy but the coma/Kendall's spirit scenes are some of the best that I've seen from Alicia Minshew in the long time. When Kendall's spirit sat with Spike, I got a little teary. When she watched Reese and Binks on Christmas Eve I got a little bit more teary. Now, I really want her to wake up because the reunion with Zach will completely kill me. Break out those tissues!

You know what I missed this year, though? The big, holiday party scene. I realize that with the tornado clean up, Babe's death and Kendall's coma most of the core families aren't up for a big party. But what happened to having them gather together to open presents? What about celebrating for the kids' sake? JR did a great job with Little A and Binks and Reese made sure their brood knew that Santa was coming, but I really missed seeing Erica and Jack at home with the Slater Clan, seeing the Hubbards celebrate their first Christmas together after 20 years and it would have been a perfect ending to see Jake and Taylor try to ignore their true feelings under the mistletoe.

I'm all for the drama of soap opera worlds, but around the holidays, I'd like to see a little more lovin' and a little less manipulation. 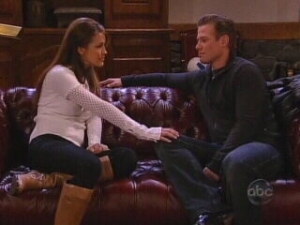 Hey there, Pine Valley Faithful, as I write this the wind is blowing, various news outlets are tracking Santa Claus’ progress around the globe and things in Pine Valley are going from better – to worse!

Things are looking up for Bianca and Reese. Binks seems to have gotten over her You-Can’t-Have-A-Past shock at news of Reese’s ex-fiance. On Christmas Eve, she re-proposed to Reese and gave her an engagement ring. How sweet! But, that seems to be where the goodness of the Holiday Season is ending – at least this year!

For me, Amanda really, really crossed the line this week. Taking Little A’s shell and using that to get JR to drink was waaaaaaay over the line. Up until now, I really thought she would pull back and maybe even tell JR what was going on so that they could work together to get rid of David. But hiding the shell – the one thing Little A believes is protecting JR from dying, too – was just flat-out wrong. My husband, who only watches sporadically, agrees with me. He saw that scene and was screaming at her to hand over the shell.

For all of the waffling that Amanda is doing – what was that long stare at Babe if not a feeling of guilt? – I really hoped that she was ready to turn away from David. I guess that wouldn’t be a soap opera, though, that would be more like real life! 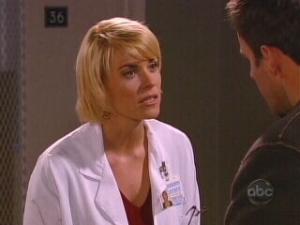 All My Children Promo for the Week of December 29 on Soaps.com!