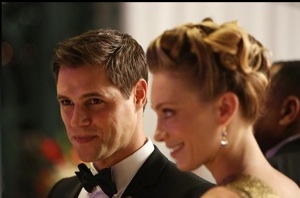 This past week brought baby news, movies, TV shows and engagements for “All My Children” alums. Keep up with your favorite past, present and future Pine Valleyites.

AMC online update:
“All My Children” has hired a new supervising producer. Find out who in Prospect Park to Migrate AMC and OLTL Online.

Mark Consuelos in Alpha House:
“AMC’s” former Mateo has been cast in the Amazon Studios pilot “Alpha House.” Also starring John Goodman (“Argo”), the comedy is about four senators living together in a rented Washington D.C. house. Per Deadline, Consuelos will play one of the senators who is described as having an excess of charm and swagger. Find out which former “One Life to Live” and “General Hospital” star will also appear in Soaps.com’s OLTL Soap Digest.

Julia Barr back to AMC?
Jordi Vilasuso’s (Griffin) website Paos Revolution announced via Facebook that Julia Barr will be part of “AMC’s” online launch. However, no official statement has been made.

Melissa Claire Egan engaged:
She was married numerous times on "All My Children" as the good girl turned wacko Annie and now Egan is getting hitched in real life. Read more about the actress, who currently stars on "The Young and the Restless" as Chelsea, and her good news at Melissa Claire Egan Engaged.

Lee Meriwether in The Ultimate Life:
Meriwether recently tweeted news of her latest project, the sequel to "The Ultimate Gift." The 2006 movie was based on the book by Jim Stovall of the same name. It's about a man named Jason who, upon the death of his wealthy grandfather, receives a series of tasks to complete in order to receive his inheritance. The film also stars Abigail Breslin ("New Year's Eve") and James Garner ("The Notebook"). "The Ultimate Life," due out this fall, details what happens to Jason in the aftermath of his inheritance.

Sam Page on Scandal:
Page (ex-Trey) will guest star in the February 21 episode of "Scandal." The episode titled "Boom Goes the Dynamite" will see Olivia and her team working for an up and coming politician, but as matchmakers instead of fixers. "Scandal" airs on ABC Thursday nights at 10:00 AM EST.

Read about the Jolie-Pitt offspring making her big screen debut in Soaps.com's Celebrity News and find out who could perish in a fire on "Corrie" in Soap Scoop: UK/Australia Edition.