All I'm going to say is that I'm tired of Greenlee turning up everywhere Ryan and Annie are. She has no business going to Oak Haven, going to the hospital, going anywhere that Annie might be. That isn't the kind of support Ryan needs and it certainly isn't the kind of stability that Annie needs. And yet she keeps showing up and making things that much worse. Get a clue!

First, let me say, it's about time Randi and Frankie finally made love. Bad past, abusive relationships, no family to lean on. Yeah, all that adds up to Randi's lack of trust in everyone – including herself – but boy did it take a long time for her to open up and trust Frankie. Frankie, the most trustworthy Hubbard of them all! So, it's about time!

Message to Bianca – everyone has a past. You do. Maggie did. Zoe/Zarf did. Of course Reese has a past and of course there are going to be things in her past that she doesn't like to talk about. And yet, you recreate the Spanish Inquisition when you find out that Reese was previously engaged? And when Reese tells you how confused she was, you don't take her seriously and keep pushing for more answers? Binks, Binks, this is just not you. You're our trusting Kane Woman. You're the Kane who understands and offers support. Turning into Jealous Erica, Jr. just doesn't fit on you!

And, I can't say enough how glad I am that Reese finally made Zach tell Bianca the truth about Kendall. I do understand him wanting to give her hope, but that is just futile at this point. She needs to know so that she can prepare for Kendall's death. So, kudos to Reese for making Zach talk. Now if we could just get her to stay away from Zach before something bad happens!

As we head toward the Christmas holidays, I think Pine Valley is ripe for some drama – and I have a feeling we're going to get it in spades!

What would you like to see happen over the holidays and into the New Year? Talk to Soaps.com about it below! 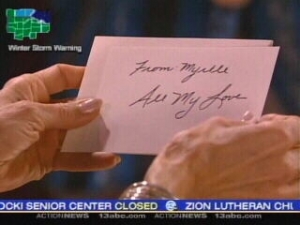 Doctors and comas and MP’s – oh my! Liars and mental states and drugs – oh my! These are just a few of the bad things going on in Pine Valley this week, fans, and we have a lot of opinions based on threads in the message boards. You know what I think? It’s all good. Seriously, even the things I am hating at this moment make great soap operas, so I really can’t complain.

Although you know I’ll have a couple of complaints as we roll along.

I knew going into the December 19 episode I would need tissues. I didn’t realize I would need two boxes! Okay, now you all know I’m just a big sap. Seriously, though, who wasn’t touched by the tribute episode to Eileen Herlie (Myrtle)? Looking back at those late 1970s and early 1980s episodes was a fun walk down Memory Lane; it was the responses of the characters to those memories that killed me. When Erica broke down about Myrtle holding her hand going to Betty Ford and when Bianca remembered when Myrtle was the only one to stand up for her, I couldn’t help crying. But then Zach (Thorsten Kaye) broke down in the elevator and it was over. Done with. Gone. I just lost it, not just because of the characters but because of the actors; we saw today how tight this group of actors really is and that touched my heart as much as the words that were said and the tears that were cried.

Pine Valley really did lose it’s heart, or at least a little piece of it, today.

Last week I polled you guys on what makes David a good villain. Most of you think it is because of his tunnel vision and manipulative capabilities. I have to say I agree. David is a master manipulater and once he sets a goal, nothing is going to stop him.

Of course, I don’t think he bargained on Adam outing him in his backward way. I loved that scene. As Adam was telling Krystal how he would manipulate the situation, it was exactly what David has been doing – and Krystal finally saw it! She wouldn’t admit it, but she saw what he is doing. So I’m excited to see what will happen now that she’s crashed her car because of David. You know, I love Krystal. Sometimes she’s a little bit hard to take, but I really, really enjoy the character. She has a great heart (like Opal), she knows what she wants (like Erica) and she isn’t afraid to fight for it (like Erica).

On the other hand, she’s a little bit too vulnerable. A couple of weeks I mentioned that Krystal’s grief this time around is a bit over the top. I still feel that way. The writers are making her way too vulnerable. Krystal wouldn’t lean on David – she would lean on Adam. Krystal would wonder about the milk and her actions after drinking it but instead she’s just happily clumping along. I want Krystal to smarten up and realize that although Babe is gone, she still has Jenny, Little A and Kathy who all need her. The Krystal we all know wouldn’t have forgotten them so easily.

Okay, back to David.

His manipulation of Joe this week was classic. And, while I wanted to Joe to fight back, I can see the potential coming down the pike once Joe returns from Tara’s surgery. On his home turf, with Jake and Angie and Tad, I can see a little smack-down coming to David! And I can’t wait!

Speaking of doctor’s, there is a new one in town – Dr. Sinclair. So far she has only had a few scenes but I have a feeling she is going to be in many, many more. Why? Because she isn’t sitting back like most ‘guest’ doctors; she is taking an active role. Finally, finally, a doctor told Ryan to butt out and stuck with what was said. Finally, a doctor called Ryan on his past behavior and didn’t back off and finally a doctor kicked Ryan out of Oak Haven – and away from Annie – and meant it. Hopefully Ryan will get a clue that Annie does have major problems and that he is at the root of most of them. Finally! Now, maybe whatever Aidan is planning can move forward and he – and Annie! – can finally have their revenge. Isn’t that sweet?

Get Holiday Gift Advice from All My Children's Denise Vasi!