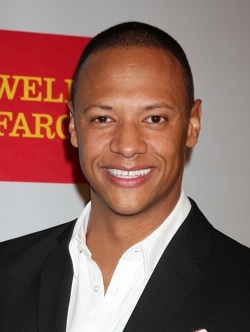 The past week brought more hope for “AMC” going online and news of Daytime alums on the big screen, voicing video game characters, and holding fan event parties. As we wait for confirmation on the cancelled soaps being resurrected, catch your favorite former Daytime stars in other projects.

AMC migrating online update:
Some encouraging news came down last week regarding Prospect Park resurrecting “All My Children” online. Two former Pine Valleyites have already signed on to reprise their characters should the online version of the soap become a reality. Lindsay Hartley and Vincent Irizarry are ready to play Cara Castillo and David Hayward once again. In addition, former “AMC” writer and producer Ginger Smith has reportedly been tapped to take on the role of executive producer. Read more in Soaps.com’s Prospect Park to Migrate AMC and OLTL Online?

Emerson Brooks voices character in Army of Two: The Devil’s Cartel:
Brooks, who played Jane’s (Susan Lucci’s) right hand man Ben during Erica’s (Lucci) kidnapping, has been keeping pretty busy voicing characters in video games. The last two years he could be heard in such games as “Call of Duty: Modern Warfare 3,” “Saints Row: The Third” and “Halo 4.” Coming up in 2013, he’ll be part of “Army of Two: The Devil’s Cartel.”

Billy Miller re-signs with The Young and the Restless:
Soaps in Depth has reported that "AMC's" former bad seed Richie Novak has decided to continue on as Billy Abbot, who he has been playing since 2008. Read more at Y&R re-signs Billy Miller.

Sydney Penny in Heart of the Country:
Penny, who played Julia Santos Keefer, stars in the film about a woman who returns to her family in North Carolina after her husband is arrested for Wall Street fraud. The movie, due out in 2013, also stars Gerald McRaney ("Fairly Legal") and Jana Kramer ("One Tree Hill").

Ella Thomas in Nina:
Thomas played Ricky Torres' (ex-Eddie Matos) partner in crime Diana Holden on "AMC" and in 2013 she'll play Lorraine Hansberry in the biopic about jazz musician Nina Simone. Hansberry was a playwright and the author of "A Raisin in the Sun," as well as a close friend of Simone's. The project also stars Zoe Saldana ("The Words"), David Oyelowo ("Jack Reacher") and Mike Epps ("The Hangover").

Walt Willey's Wild and Willey Comedy Tour:
Willey (ex-Jack) will perform at the Racine Theatre in Racine, WI on February 9. The event will serve as a party to celebrate his new comedy DVD "Wild and Willey in Jackson; Live at South Street." Go to Walt Willey World for more information.

Read about the new developments regarding "One Life to Live" migrating online in OLTL Soap Digest.

Find out which reality TV couple will compete on "Celebrity Big Brother UK" in Soaps.com's Reality TV Rush and keep up with the Port Chuck 2013 Winter Tour.