Somebody slap me! Seriously, this is getting way out of hand. Greenlee knows how highly strung Annie is at the moment and yet she shows up everywhere Annie is? She's at the police station, she's at the hospital and she's at Annie's commitment hearing? I don't think so. She has no business being in any of those places and yet she just keeps popping up. And if she plays mother to Emma one more time I'm going to scream. She wrecked Emma's life and now is trying to assuage her own guilt by telling Emma the unvarnished truth about her mother? The girl is six years old, not twenty-six! She has no business knowing about the stabbing, the kidnapping or anything else. And begging her comatose best friend to wake up and solve her problems? Yeesh! I think Kendall has more on her plate than fixing Greenlee's life! Writers, Greenlee is self-absorbed, but you're writing her as a . . . I can't use that word here. But you know what I mean! Get a grip and redeem Greens before it's too late!

And Ryan. RyanRyanRyan. Somebody gag Jesse, Greenlee and anyone else who wants to tell him he is absolutely not responsible for Annie's state of mind. I agree that her breakdown would have happened sooner or later because of her upbringing, but Ryan did nothing to stop the breakdown. In fact, I believe he instigated it.

Annie, though, still has my sympathy. And I can't wait to see what happens once she is in Oak Haven. Can you imagine to explosion if Annie and Janet became friends and decided to work together to wreak havoc? Yummy!!!

By the way, Melissa Claire Egan (Annie), you rock! If you don't get an Emmy nod for this, there is something wrong with the world!

Alicia Minshew, where are you? Yes, you deserved a break as Kendall (man, do you work hard!) but we miss you already. We miss Kendall. We miss Zendall. Come back to us!!

Okay, seriously, I titled this section Kendall but it's really about the Kane/Slater clans in general. I can't take anymore bedside chats with Zach, Erica or Bianca. I tear up every time, especially the Zach segments. You can taste his grief. But, word to the wise, don't believe David's diagnosis. Since when is he every 100% honest when it comes to a diagnosis? I have a feeling David has something up his sleeve!

One thing that is bugging me, though, is the newfound connection between Zach and Reese. Zach is our strong, silent hero. Why is he suddenly confiding in Reese and telling her to keep his secrets. He doesn't know this woman and he's telling her more than he would tell Kendall in the same situation. This is just too weird. Makes me wonder what Reese is really up to!

Once in a while soaps really get things right. Everything isn't perfect just yet, but I love the upped drama headed to Pine Valley of late. What do you guys think? Talk to Soaps.com about it below! 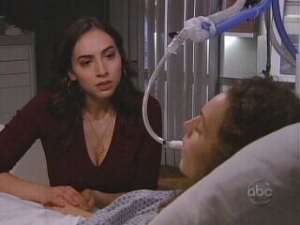 Credit: Can they make up? (Soaps.com)

With everyone killing themselves to buy the perfect gifts, get everything wrapped and stay away from the cookies, it was good to have the distraction of All My Children! Nothing makes me feel better than emotional drama and that feeling of superiority when your favorite love-to-hate character does something really low.

I know a lot of you disagree with me, but I love David. Love him, love him, love him. He’s such a great evil character! And what he is doing to JR and to Krystal is so in character for him! Think about the past – he drugged Dixie, stole her child, tried to destroy all things Chandler and Martin. This return is right on target – and I love it! Hate what he’s doing but love the way he is doing it. JR doesn’t deserve to lose Little A and I truly believe he’s finally a changed man. But what fun is it to watch him sit on the sofa with Little A? With Amanda there, pumping him for information there is something to watch. And she’s conflicted which makes it even more dramatic. As far as Krystal, I know she lost her Baby Doll, but where was this emotional instability the first time Babe died?

After the Satin Slayer supposedly killed Babe Krystal bounced back in about two second. Now it’s weeks after her death and she’s breaking down? This is just a little weird. And what is with her leaning on David? Correct me if I’m wrong but they didn’t have a big love story. He was drunk and she was dumped and baddabing, baddaboom, Babe happened. Last time around could they even stand one another? So why is she suddenly so intent on grieving with him? I’m lost on that one.

Hallelujah! Someone finally mentioned Carmen. She’s not missing in action or dead from the tornado. She’s fine and still dating Jack. Whew! I’ve been worried about that. I wonder if she was maimed, though, because she still hasn’t been seen.

Okay, seriously, what is with Erica’s ultra-fast recovery? She was stabbed on Monday, touch and go in surgery with a lacerated liver – and isn’t that what killed Julia about six months ago? – and by Friday she’s entertaining gentlemen friends and flirting like there is no tomorrow? Man, I need her super-fast-healing genes! But, I do love the triangle the writers have going right now. Erica wants Jack but won’t say it. Erica is using Adam to get to Jack and Adam knows it. This is classic soap opera. The only thing that could ruin her plans is if Adam falls for Jack along the way. Hey, it could happen!

Susan Lucci (Erica), David Canary (Adam) and Walt Willey (Jack) are amazing at what they do so keep up the good work writers!

Man, can newcomer JR Martinez (Brot) act or what? I am loving his character and I’m totally enthralled with Broth’s connection to Taylor. Beth Ehlers (Taylor) also blew me away this week. I know Brot and Taylor probably won’t be a long-time couple, but I can’t wait to see what the writers have in store for them!

All My Children Video Clip: JR Martinez and Beth Ehlers On The View!!