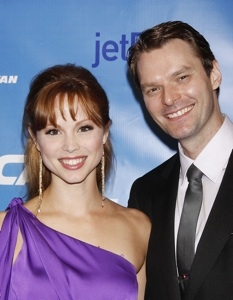 Fan events, renewed hope for “AMC’s” move online, baby news and a new home renovation show for a fan favorite. Get the scoop on what everyone’s up to.

AMC migrating online update:
Deadline is reporting that Prospect Park has reached deals with the SAG-AFTRA and DGA unions, but not the WGA. They would use financial core writers instead, which means writers who have given up their memberships in the guild. “AMC” and “OLTL” would be cut down to 30 minutes an episode with the goal of filming in February in Stamford, CT. There have also been reports that Prospect Park has reached out to Susan Lucci (Erica).

Thrilled to announce that @sarahglendening and I are having a GIRL!Due date is May 8th.;)

Ricky Paull Goldin hosts Spontaneous Construction:
Ricky Paull Goldin (ex-Jake) spent the last few months recruiting dancing flash mobs via Twitter, Facebook and email to join carpenters and skilled laborers in various places on the East Coast with the mission of helping struggling homeowners with their renovation projects. Now, there are more details about the series, which has finally been given a name. "Spontaneous Construction" will premiere on February 20 at 9:00 PM EST on HGTV.

OK! I have the 411 on my new @hgtv series Premiere! First off, the name of the show is: SPONTANEOUS CONSTRUCTION!! Do u like the name??

Michael B. Jordan's Fruitvale at Sundance:
"AMC's" ex-Reggie stars in the true story about a young man's last day before getting killed in the Bay Area by BART officers on New Year's Day 2009. The film also stars Chad Michael Murray ("One Tree Hill") and Octavia Spencer ("The Help"). It will screen at Sundance from January 19 – 25, 2013.

Vincent Irizarry Profiles interview:
The former David Hayward sat down with "Profiles'" Mickey Burns on NYC Life to discuss "AMC," other projects he's acted in and his photography. Take a look.

Emily Alyn Lind and Abigail Spencer in The Haunting of Connecticut 2: The Ghosts of Georgia:
Spencer (ex-Becca) and Lind (ex-Emma) star in the horror film about a young family who moves to Georgia only to discover their house is haunted. The film also stars Katee Sackhoff ("Battlestar Galactica") and Chad Michael Murray. Look for the premiere in early 2013.

Aiden Turner in Deceit:
Turner (ex-Aidan) recently tweeted news of a new movie he's been working on. No details are out yet, but stay tuned.

Read about the former "OLTL" actor who recently got married in Soaps.com's One Life to Live Soap Digest.

AMC fun fact:
Cameron Mathison posed on the cover of Playgirl magazine in 1999. If you'd like to find out what he revealed as his passions over a decade ago, you can purchase the issue on Amazon.

Keep up with the Kardashian family's soapy drama in Soaps.com's Reality TV Rush and get the details on GH's Nancy Lee Grahn & Jack Wagner on Castle.