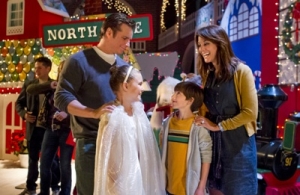 This week finds former “AMC” actors in Primetime, on the silver screen and in holiday movies. Two alums are even putting their fame to good use by supporting charitable causes.

Josh Duhamel’s Youth Run:
Duhamel (ex-Leo) will host his 3rd Red Cross Youth Run on December 2. Runners will gather in Parking Lot 5 at 2600 Barnard Way in Santa Monica, CA. Registration begins at 9:00 AM with the two mile run to the Santa Monica Pier and back starting at 11:00 AM. A minimum donation of $10 is requested to participate. Go to the Red Cross for more information.

Michael B. Jordan in Are We Officially Dating?
He played Jack’s (Walt Willey) adopted son Reggie on “AMC,” but next year, Jordan will appear in the new film “Are We Officially Dating?” The movie is about three New York bachelors who make a pact to stay single, just as they all start to fall in love. Zac Efron (“The Paperboy,” “The Lucky One”) and Imogen Poots (“Fright Night”) also star.

Shannon Kane in The Collection:
Kane (ex-Natalia) stars in “The Collection” due out November 30. The film centers on a man who must save a woman captured by a madman, whose clutches he recently escaped. Take a look at the trailer.

Jamie Luner on Criminal Minds:
The former Liza Colby recently tweeted about being on the set of the CBS series. No word on the date of her episode, but "Criminal Minds" airs Wednesdays at 9:00 PM EST.

On the set of "Criminal Minds" twitter.com/JamieMLuner/st…

Eva La Rue in Help For The Holidays:
On December 9, La Rue will be seen in the Hallmark Channel movie "Help For The Holidays" at 8:00 PM EST. The holiday special centers on one of Santa's elves (Summer Glau, "The Sarah Connor Chronicles"), who becomes a nanny to a family whose Christmas spirit is lacking. La Rue, who plays the mom, previewed for Soaps.com, "Of course, [the nanny] has all kinds of elfin magic and she sews the family back together and brings the Christmas spirit back to the family." The movie also stars former "One Life to Live" actors Dan Gauthier (ex-Kevin) and John Brotherton (ex-Jared).

Susan Lucci on the Rachael Ray Show:
In case you missed the episode when it originally aired on September 19, 2012, Susan Lucci will be on the "Rachael Ray Show" on November 27. During her appearance, a pre-taped video will see "Rachael Ray" correspondent Gretta Monahan (ex-Jake Ricky Paull Goldin's wife) helping Lucci clean out her closet. Take a look.

Jordi Vilasuso is a dad:
The actor, who played Griffin on "AMC," tweeted the news of his first child's birth on Twitter. Congrats to Jordi Vilasuso and his wife Kaitlin Riley!

At 5:11 am we welcomed Riley Grace Vilasuso to the world! We've never felt more in aww about the miracle of life! twitter.com/JordiVilasuso/…

Today in AMC history:
On November 27, 2000, Gillian packed up her things at the Martin home, as she left Jake for Ryan. Later, Ryan told Gillian he bought a yacht and was renaming it Princess after her. She warned him renaming a ship was bad luck.

Keep up with former Llanivew denizens in Soaps.com's One Life to Live Soap Digest.

Get a look at ex-"AMC's" Melissa Claire Egan in Soaps Opera Fan's The Young and the Restless spoiler video. Is Johnny still blackmailing Steve on "GH?" Read about it in Soaps.com's Top 20 Dropped Storylines.