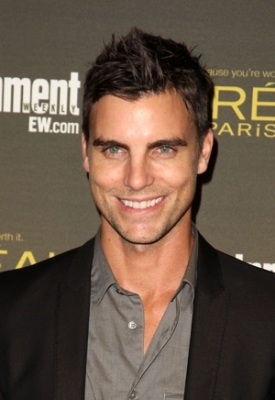 This week, there’s another film role for a popular Pine Valley alum and an unfortunate arrest for another. Meanwhile, a former soap star aids those affected by Hurricane Sandy and Eva La Rue tells Soaps.com what she thought about “AMC’s” controversial ending.

Josh Duhamel in You’re Not You.
“AMC’s” former Leo, Josh Duhamel, is in talks to star in the movie about a college student whose life is changed when she takes a job caring for a woman with ALS. Duhamel will join Hilary Swank (“New Year’s Eve”) and Emmy Rossum (“Shameless”) in the adaptation of Michelle Wildgen’s novel.

Colin Egglesfield back to The Client List:
When the second season of “The Client List” premieres in 2013, viewers can expect to see Colin Egglesfield (ex-Josh) reprise his role. He plays the brother of the husband who ran out on Jennifer Love Hewitt’s character. Of course, he has feelings for his sister-in-law. Click on the link within Egglesfield’s Twitter announcement to see a photo of him with Hewitt on set.

Eva La Rue on the end of All My Children:
With the recent launch of Eva La Rue’s jewelry line, the actress talked to Soaps.com about her new venture. Of course, the conversation also turned to Pine Valley. When asked about her returning to reprise her role of Maria before the “AMC” finale last year, La Rue replied, “Oh, it was awesome. It was awesome and it was heartbreaking. Sarah Geller [ex-Kendall] and I talked about it so much because it’s where we felt like we grew up and where we honed our craft and learned to act. It was so sad that week going back. And I have to say, I was intensely disappointed in the final week. I just thought…I expected more out of it. I expected to cry more. I think the only thing that made me cry the whole last episode was Tad’s [Michael E. Knight] speech. The rest was really, really bad. It was all based on that company, whoever they were, who said they were going to buy the show and put it on the web, but they never had any contracts in place. They never even approached the actors. And I kept saying, ‘Wait a minute. How is this going to happen if they’ve never even approached the actors and there’s a week left of the show?’ Then they did the entire show around it continuing on the web and I think it just ripped off the fans completely. They wanted to see a final tribute, a final send off to an iconic show that had been part of their lives for more than 40 years and we as fans, because I was a fan. I never stopped watching and neither did Sarah. Neither did Kelly Ripa [ex-Hayley]. We got ripped off.”

Susan Lucci in Lifetime PSA:
It's November 6, which means it's Election Day. Along with several other high profile women, including Eva Longoria (ex-Isabella, "The Young and the Restless"), former Secretary of State Condoleezza Rice and Jennifer Love Hewitt ("The Client List"), Lucci implores women to get involved in politics. Watch Lifetime's Your Life. Your Time. Your Vote. on YouTube.

J.R. Martinez on NYC Marathon cancellation:
For the last few months Martinez (ex-Brot) has been training for the NYC Marathon where he was planning to raise money for the New York Road Runners' youth program. Those plans changed upon the cancellation of the event due to Hurricane Sandy. Martinez took to Twitter to share his thoughts on the decision.

I was, as were so many others,looking forward to running the ING New York CityMarathon.My thoughts and prayers are with everyone

during this difficult time. The city of New York is full of strong & wonderful ppl. This is a time for all of us to unite & help NYC recover

Michael Nouri arrested:
He came down from the mountain as Caleb Cooney to fight for Erica Kane's (Susan Lucci) heart on "AMC," to no avail. His off screen personal life is even more complicated, as the actor was reportedly arrested on suspicion of felony domestic violence after a fight with his girlfriend allegedly turned physical last week. He was held on bond and released early the next morning.

Abigail Spencer back to Suits:
She played Becca on "AMC," but on "Suits," she was Harvey Spector's rival and romantic interest Dana Scott in the August 4, 2011 episode. She'll be back for more in the second season, which returns January 17. In the meantime, Spencer can be seen on the big screen in "Chasing Mavericks."

Denise Vasi helps victims of Hurricane Sandy:
Vasi (ex-Randi) is helping the people of Staten Island deeply affected by Hurricane Sandy. She has been tweeting her efforts, which have included buying blankets, baby supplies, food, cleaning supplies and more using donations sent to her by her followers. Keep up with her efforts by following her on Twitter below.

You can send money via PayPal to: denisevasiclub@aol.comI can assure you each dollar will go towards purchasing supplies.

AMC Fun Fact:
When Agnes Nixon failed to sell "All My Children" to a network in the 60s, she became head writer of "Another World" and based the character of Rachel Davis (later to become Rachel Cory Hutchins) on her model of Erica Kane.

Read about who is returning for "The Bold and the Beautiful's" Stephanie's goodbye in Soaps.com's Soap Opera Comings and Goings. Who put Mason on Emily's trail? Find out in Soap Opera Fan's Revenge recap.