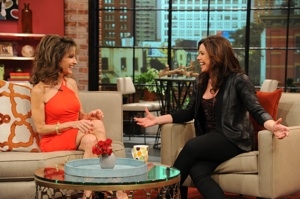 Susan Lucci (ex-Erica) will stop by “Rachael Ray” on September 19. While there, she will discuss her new shows “Deadly Affairs” and “Devious Maids.” In anticipation of the interview, Soaps.com received a few sneak peek quotes made by the former “All My Children” star.

Rachael also asks Lucci how she would perform a “Deadly Affairs” like act. Lucci responds, “I just know if I made one of these discoveries like you open the bedroom door and go ‘Hi, honey, I’m home’ and he’s there and somebody else is there too it would not be a pretty picture.”

Moving on to “Devious Maids,” Lucci teases, “It’s gonna be on after the New Year and we’re going to start taping pretty soon. The pilot was so much fun to do. Marc Cherry is such a good writer. It’s going to be fun!”

“The View’s” Joy Behar will also be a guest on September 19. Check local listings for show times and channel.

Syed’s financial problems are lessened by the attention of an attractive stranger on “EastEnders.” Get more details in Soaps.com’s Soap Scoop: UK/Australia Edition. Read about Penn Badgley’s reaction to his ex Blake Lively’s marriage to Ryan Reynolds in Soap Opera Fan’s Star Gazing.

EX-All My Children Stars In The...