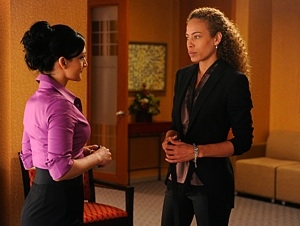 You might recognize Tawny Cypress from recurring stints on “Rescue Me,” “Army Wives,” “K-Ville” and “Heroes,” but in 2003 she played Maggie’s (Elizabeth Hendrickson) professor, Shambala Stevens, on “All My Children.” She’s compiled quite an impressive list of credits since her soap days and will next be seen in the season premiere of “The Good Wife” on September 30.

In the episode titled, “I Fought the Law,” Cypress will reportedly give series regular Kalinda (Archie Panjabi) information that helps Alicia (Julianna Margulies). “The Good Wife” airs on CBS at 9:00 PM EST.

Read about Leven Rambin’s new movie in After the Soap Finales: Where Are They Now? What superstar couple was recently on the French Riviera? Get the scoop in Soap Opera Fan’s Star Gazing.