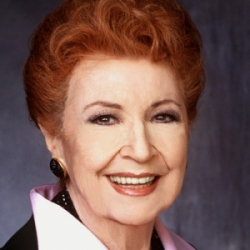 There is very sad news around Pine Valley today, fans. Soaps.com has learned that Eileen Herlie (Myrtle Fargate) has died. She died on Wednesday, October 8, 2008; Eileen was 90 years old. According to news reports, she died of complications from pneumonia

Because of her age, in recent years, Myrtle’s appearances in Pine Valley were relegated to events such as Miranda’s birthday or phone calls with Zach, who she had a deep relationship with. Many of her scenes, in fact, were with the extended Kane family. This was fitting since Myrtle became a kind of surrogate mother to Erica after Mona’s death. The character was also very close to Bianca and was a mentor to the whole town.

To get a good idea of the bond between Zach and Myrtle, watch this video.

Eileen has played the feisty Myrtle since 1976. She was trained as a stage actress and had a very successful Broadway acting career. She starred in plays such as “The Matchmaker”, “All American” and “Crown Matrimonial”; Eileen won a Tony Award Nomination for her role in “Take Me Along”.

In one of her first roles, she was cast by Sir Laurence Olivier in his 1948 film version of “Hamlet”; she played Gertrude, Hamlet’s mother. She also played Gertrude opposite Richard Burton in the 1964 Broadway adaptation of the play.

She lived in New York and is survived by her brother, her nieces and nephews.

Soaps.com wants to send our deepest condolences to Eileen’s family and friends. She was an amazing woman who will not be forgotten.