Have you watched "AMC's" ex-Ethan James Scott's Daytime Emmy Red Carpet Interview? Click the options button in the right hand corner of the video player on the main page to choose which interviews you'd like to view.

Before Sonny Corinthos there was Nico Kelly.

Cecily Davidson came to Pine Valley in 1987 to stay with her godmother Phoebe Wallingford. Wanting to break away from her controlling mother, she married Nico Kelly in order to get her trust fund so she could open a club. In exchange, she agreed to split half her money with him.

The two eloped, but then she learned they needed to be married for six months before receiving the money. Nico was furious upon learning of the delay and they decided to get their marriage annulled. However, Nico and Cecily ended up staying together and by the time the six months were up, they were in love. Nico proposed again and they went to Hawaii for a second wedding. They eventually left Pine Valley in 1989.

Cecily returned in 1994 without Nico, who she divorced. She met Charlie Brent and had his child.

Do you remember Nico and Cecily? Watch the clip and fill in the blanks on their relationship below. 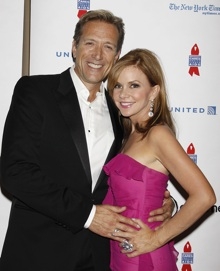