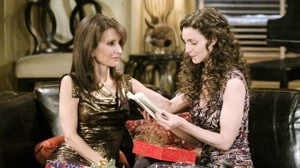 Mother of the year?

Since the towns in Daytime dramas usually only consist of about 30 people (that we see onscreen anyway), soap characters tend to be an incestuous bunch. It’s not uncommon for someone to sleep with, or even marry, an ex of a friend, relative or rival. Even mothers and daughters have shared men on just about every soap opera.

With Mother’s Day approaching, Soaps.com is taking a look at which mother did not sleep with one of their daughter’s paramours. It still might not warrant them receiving flowers from their offspring on the holiday, but at least they didn’t cross the line by sharing a lover with their child.

So, who had enough sense to skip this bonding moment with their child? To help you find the answer, take a look in our All My Children Cast List.

Find out which "All My Children" actors received a 39th Annual Daytime Emmy Nomination.