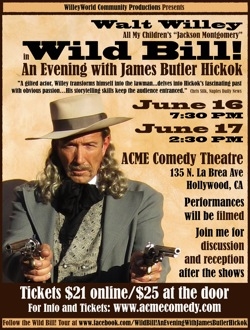 Walt Willey (ex-Jack) is bringing his one-man show to Hollywood. Previously performed in Florida, Willey will star in Wild Bill! An Evening with James Butler Hickok at the ACME Comedy Theatre on June 16 & 17.

The theater is located at 135 N. La Brea Ave. The performances, which will be filmed, will be at 7:30 PM on Saturday and 2:30 PM on Sunday. A discussion and reception will follow the shows.

Find out what other former soap stars are doing at After the Soap Finales: Where Are They Now?

Ex-All My Children's Susan Lucci On...