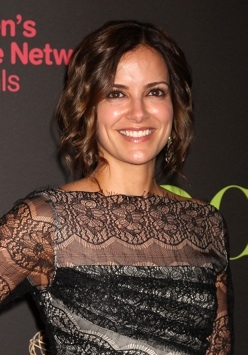 To the big screen.

Rebecca Budig (ex-Greenlee) recently shared what she’s been up to since leaving “All My Children” on Twitter. Budig stated, “Finished an Indie film recently, called ‘Bad Parents’ and working on getting a new gig!”

“Bad Parents” is about obsessed parents of a seven-year-old girls’ soccer team whose behavior gets out of control. Based on the stage play “It’s All About the Kids,” the film also stars Janeane Garofalo (“Reality Bites”), Christopher Titus (“Titus”), Cheri Oteri (“Saturday Night Live”), Kristen Johnston (“3rd Rock From the Sun”) and Michael Boatman (“The Good Wife”).

Read about fellow “All My Children” alum J.R. Martinez on The Price Is Right.

Rihanna Claps Back After Fan Shades Her For Wearing Sunscreen In ‘Winter’: You’ll Have ‘Wrinkles’