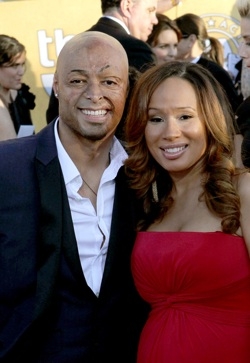 J.R. Martinez (ex-Brot) and his girlfriend Diana Gonzalez-Jones are expecting their first baby in May. In preparation for their daughter’s arrival, former “All My Children” executive producer Julie Hanan Carruthers threw the couple, who met on the set of the ABC soap, a baby shower.

Per People, the English tea themed event was held at Carruthers’ home on March 17. A cake from Sugar Fairy Bake Shop was served with the couple receiving an Orbit Baby stroller and Daddy Scrubs, among other gifts from their 40 guests.