All My Children Throwback Thursday Poll: Who Killed Edmund? 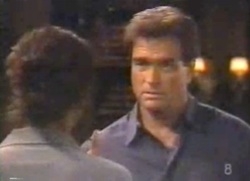 After a presumed dead Maria returned to town as Maureen Gorman and got her memory back, she reunited with Edmund. Their happiness was short-lived though when Edmund became paralyzed after getting shot by Argentinean thugs.

Edmund grew bitter and shut Maria out. Things got worse when Maria’s ex-lover Zach Slater came to town. Their connection fueled Edmund’s jealousy, leading him to set Zach up for shooting Ryan and making plans to divorce Maria and never let her see their kids again.

During all this Edmund got the mobility in his legs back, but kept it a secret. One night in 2005, he went to the stables to meet a mystery person in regards to Ryan’s shooting. He stepped out of his wheelchair to fix a fallen heater and was hit in the head with a shovel, which led to his death.

Zach dragged Edmund out of the stables, which went up in flames, but did he kill him? Or was it someone else? Vote in our poll and share your thoughts on this storyline below.