All My Children Throwback Thursday Poll: The Libidozone Effect 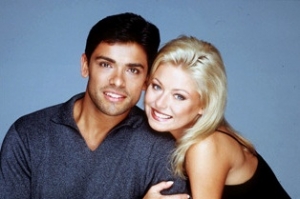 In November 2000, Ryan threw a party for his company Incredible Dreams. Hoping to get Tad to cheat on Dixie, David planned to drug Tad’s drink, but ended up spiking the entire punch bowl with the drug Libidozone.

Everyone at the party, which included most of Pine Valley, sampled the punch and started getting amorous feelings for the objects of their desire. Adam literally promised Liza the moon, Jake came on to Gillian, Jack was drawn to Erica, and Ryan told his party guests to get naked.

It was quite an event, one that David didn’t live down so easily, but there was one hook up in particular that shocked Hayley when she found another woman in bed with her husband Mateo.

Do you remember who made Mateo think she was Hayley and tried to seduce him? Vote and comment on the infamous storyline below.

Test your Oakdale knowledge at As the World Turns Throwback Thursday Poll: Proof Of Death. Join us on Twitter @soapoperafan, and Facebook. Come tweet and Facebook with us about "All My Children," all the other soap operas, "Glee," "Grey’s Anatomy," "Vampire Diaries" and "Venice the Series!"

Ex-All My Children's Walt Willey In...