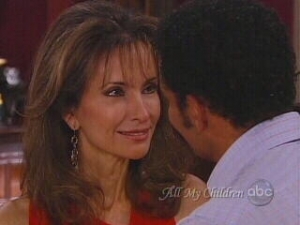 Put on your dancing shoes, Pine Valley, another fan favorite is headed to reality stardom! This morning, the new cast of the ABC hit Dancing with The Stars was announced and Susan Lucci (Erica Kane) will be one of the celebrity dance competitors!

Congratulations, Susan – and get ready for a work out! The competition this year includes several Olympic athletes and a football star!

Susan is teamed up with Tony Dovolani; this will be Tony’s sixth season on the show!

This season will be a little bit different because two couples will be eliminated during the first week of competition.

The season kicks off with a three night premiere event on Monday, September 22, 2008. The Jonas Brothers and Jesse McCartney (ex-JR Chandler) will perform during the results show on Wednesday, September 24. Also new this year is a kids ballroom competition; the fan favorite couple will return for this season.

Viewers can phone in or text their votes for favorite dancer after the Monday and Tuesday night performances; fans can also go online to vote.

Susan isn't the first daytime star to dance for her life. Kelly Monaco (Samantha, General Hospital) and Cameron Mathison (Ryan) have also danced on the show. Just as we did when Cameron was starring on the reality hit, Soaps.com will blog about Susan's performance after each episode; we'll tell you our favorites and then update you on whether she is staying to dance or leaving her dancing shoes behind in Los Angeles.

Whatever happens, Soaps.com is certain Susan will heat things up on the dance floor and give those football and Olympic athletes a run for their money! Soaps.com wishes Susan the best of luck. We hope you bring home the mirror ball trophy!

AMC's Bobbie Eakes Catches Up With...