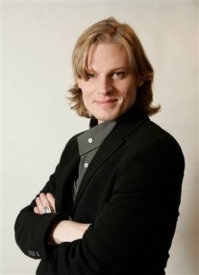 Mark down another play for All My Children’s Jeffrey Carlson, ex-Zoe/Zarf. Soaps.com has learned he will star in a Chicago production of the Shakespeare play Edward II. The play is being produced at the Chicago Shakespeare Theatre.

This is Jeffrey’s third Shakespearean play since leaving Pine Valley in 2007. He starred in the Washington D.C. production of Hamlet soon after leaving the show and earlier this year was cast in “Antony & Cleopatra”.

Jeffrey’s acting career has really taken off since leaving the show. In addition to the two other plays, he appeared in the independent film “The Killing Floor”.

This particular production will be slightly different than most plays. At the Chicago Shakespeare Theatre, the actors perform among members of the audience, who are allowed to move around the theatre throughout the production. Tickets to stand among the actors are just $20 or play-goers can choose to sit in actual theatre seats to watch from just above the playing area.

If you’re in or around the Chicago area, it’s a play you won’t want to miss! Click here for tickets and showtimes. The play runs from October 1, 2008 through November 9, 2008.

Congratulations on your new role, Jeffrey! Soaps.com wishes you the best of luck!

AMC's Jesse McCartney to Perform for...