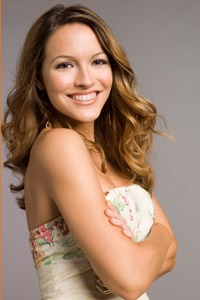 Daytime television doesn’t leave a lot of down time for other projects but every now and again something comes along that can’t be turned down. For Chrishell Stause (Amanda), two such projects have come along. The first is an online dating series on Fuse TV. You can read more about that by clicking here. The second is a psychological thriller – with a part written specifically for Chrishell!

Soaps.com had a chance to catch up with Chrishell last week, who says she is excited about the new projects and about Amanda’s future on AMC!

Chrishell: “My manager and his business partner created the series and wrote the character of Madison specifically for me.”

Kristi: “Tell us a little about the show…”

Chrishell: “We’re calling it a psychological thriller about the duality of life. The show is about Luke Vincent, a self-help motivational speaker/best selling author, who in reality is a drug addicted serial killer. . . I have a three episode arc in the first season, with major storylines for season two.”

(Editor’s Note: Fans, you can see the trailer here on You Tube.

Kristi: “Was is strange to go from the structure of daytime to the looser online series?”

Chrishell: "It was strange to file the same scene several times. I am definitely not used to that!"

Kristi: "How about some details. Show times, the number of episodes and air dates."

Chrishell: "There are a total of eight episodes. The launch date is September 3, 2008, and there will be a new episode every week."

Kristi: "Are you working on any other non-AMC project that you can tell us about?"

Chrishell: "You can also see me on the FUSE network co-hosting a dating shoe called "You Rock, Let's Roll". Monday-Thursday at 6 pm Eastern Time [Fans, Jared Cotter from American Idol is co-hosting!]. I had so much fun being able to improv - something completely different from what I'm used to on AMC!"

Kristi: "Amanda has been fairly quiet for several months not but it seems like she and Babe are beginning to rebuild their friendship and now there is her crush on Jake and her mentoring (kind of) of Randi. . .is Amanda getting to a better place in her life?"

Chrishell: "As of right now things are definitely looking up for Amanda. She and Jake are hitting it off, business if going very well, and her friendships are growing. But you know how soaps are, the better things are - the worse they can get! Ha ha!"

Kristi: "I know you can't give us full storylines but are there any teasers you could share with us?"

Chrishell: "Look for Jake and Amanda to heat things up and watch out for a new scent to hit Pine Valley!"

Kristi: "We've received a lot of wardrobe questions about Amanda. Is there a favorite designer that you like to wear on the show?"

Chrishell: "The wardrobe is many times one of the great parts of my job. The very first wardrobe fitting I ever had on the show made me gasp at how expensive everything felt. I don't think my skin had ever even felt cashmere before! Black Halo is my favorite [designer] to wear."

Kristi: "Some fans have written in to ask a few questions. First, how is Amanda like Chrishell?"

Chrishell: "Well, we both like makeup and we both need to keep tabs on our mothers - ha!"

Kristi: "Second fan question: What character, other than Amanda, would you like to play on AMC?"

Chrishell: "Hmmm…I think I would want to be Zach for a day! Why not?"

Kristi: "Last fan question: Everyone has a guilty pleasure, what is yours?"

Chrishell: "I have a huge sweet tooth. I could put Nutella on ANYTHING!?

(Editor's Note: I can understand that! Nutella…yum!)

There you have it, fans. You are up to date with Chrishell Stause and her character, Amanda Dillon. Sounds like there are going to be some busy months coming up for both of them!

Congratulations on the new roles, Chrishell! Soaps.com wishes you the best of luck!

AMC Fans: You Could Star On A Soap!