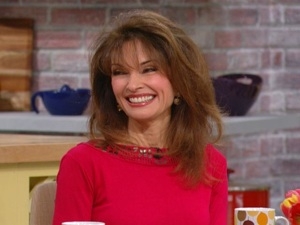 Susan Lucci (ex-Erica) will be on the “Rachael Ray Show” on February 1. The episode will also feature an interview with the First Lady Michelle Obama. Read below for some excerpts from Susan’s interview.

Could there be an “All My Children” reunion in the making: “I have to say people stop me in airports, in the theater here in New York on Broadway, I mean people stop me all the time and ask me is there a chance ‘All My Children’ will come back. I say it ain’t over till it’s over! You know, there’s still people interested, they’re still talking to Agnes about one way or the other, some people are talking about maybe a movie, some people are talking about a play or a musical.”

Susan’s one regret: “Well, first of all I feel very lucky to have come this far and not have many regrets at all, but the one I do think about, I was asked to audition for Juilliard the first year John Houseman created the John Housman School, which was then Juilliard, and I was invited to audition for that first class and I was somebody who I loved acting, but I wanted to get out of school, I was so ready to graduate from college. I wanted to go to New York and try my wings and sometimes I look back and I wish I had gone that route.”

The secret to her successful marriage: “First of all, a lot of luck is involved, I think, because I got married young and I had some instincts and thank goodness they turned out to be right, but I think a sense of humor is really important. Let some stuff go, remember the real good reasons why you fell in love with each other in the first place and don’t be afraid to say, day-to-day, you look great, I love you, you know, don’t let too much time go by.”

Susan’s favorite television show: “Actually, since I’m not on ‘All My Children’ and those late, late hours, I get to see television and I absolutely love several things. First of all, I love Dancing with the Stars!”

Read about Alicia Minshew on Jersey Couture. Join us on Twitter @soapoperafan, and Facebook. Come tweet and Facebook with us about “All My Children,” all the other soap operas, “Dirty Soap,” “Glee,” “Grey’s Anatomy,” “Vampire Diaries” and “Venice the Series!”

Ex-All My Children Stars In Psycho...