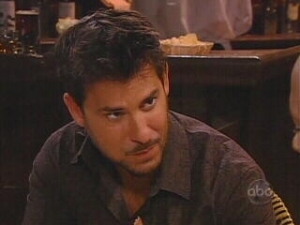 Since the beginning of the summer, rumors have been flying about the arrival of Beth Ehlers (Taylor, ex-Harley, Guiding Light). Her arrival is no longer a rumor; you can read about that here. Now, we are learning more about the character of Taylor and how Jake is going to get involved in her life.

The first two meetings have been exercise-related. A couple of weeks ago, Jake literally bumped in to Taylor on the jogging trail. The two exchanged, “Excuse Me’s” and then last week Jake was walking along the beach when Taylor stopped by. Jake tried talking to her to find out more about her but Taylor, not knowing him, shut him down. She quickly resumed her jog and Jake was left to watch her disappear into the distance.

Jake is going to immediately – as if we didn’t see this coming – going to be interested in starting a relationship with Taylor. Just like their first two meetings, Soaps.com has learned that Jake is going to try to give Taylor some jogging advice. Taylor doesn’t like the way Jake is trying to talk to her and basically ignores him. This is going to change, however.

Within the next few weeks, the relationship between Jake and Taylor is going to heat up but not just romantically. Taylor, it seems, is a very tough woman – thanks in part to the time she served with the Army in Iraq – and she is not going to like the way Jake starts butting in to her life.

As most soap fans know, this is the probably the perfect start to a not-so- perfect relationship, and could help Taylor and Jake grown in to a fan favorite couple very quickly. Now we need to come up with a super couple nickname. How about Jaylor? Or is Take more appropriate? Check in with your feelings in the comments section.

The chemistry between the two actors has already been seen, but in very small doses. Portrayers Ricky Paull Goldin and Beth Ehlers were the Harley/Gus super couple on Guiding Light until last spring with Ricky decided to fly the coop. Beth wasn't far behind. And now, fans of a new soap get to see the fun they can bring to the screen!

Fans have more questions about Jake than who he'll fall in love with. Since his return, Jake has been reluctant to even look at Colby, much less talk about her. He's also avoided Adam as much as possible. Many fans wonder if these actions could be pointing to another layer of Jake's character by introducing fatherhood.

Years ago, Jake volunteered to be Liza's sperm donor but Adam learned about his plans and switched sperm samples so that he would be the father. Jake was heartbroken when he learned that Liza's daughter, Colby, wasn't his child. So, does this renewed interest into Jake's not-so-distant path mean Adam is going to lose yet another child? Is Jake really Colby's father? We'll have to wait and see because you just never know what will happen in SoapLand!

Vincent Irizarry Back In At All My...

Kate Hudson, 42, Goes Makeup-Free While Vacationing In Italy With Her Family — Photo