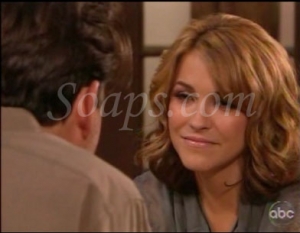 More to the story.

Even though Jake (Ricky Paull Goldin) and Amanda (Chrishell Stause) had a happy ending at the series finale of “All My Children,” there was originally supposed to be more to the story. Chrishell Stause (ex-Amanda) took to Twitter to fill her fans in on how the 41-year-old soap opera was going to end before the cliffhanger was written in.

Stause tweeted, “To those wanting to know the original ending vignette I filmed for ‘AMC’ (we had filmed before the Prospect Park offer)…Amanda & Jake walk into Oak Haven with Trevor & their new adorable boy they adopted, where Janet greets them. You see them hug & visit. Family. Each family was gonna have their own sweet vignette & music playing over. Makes me sad only a few were filmed & none will be seen.”

What do you think of this version? Share your thoughts below.

Do you remember when Janet kidnapped Opal, Krystal, Brooke, Adam and Joe? Relive it at Soaps.com’s All My Children Flashback Friday Videos.