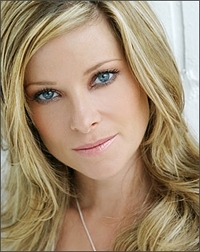 Although the past year has seen her (mostly) hopping between All My Children’s Pine Valley and As The World Turns’ Oakdale, Cady McClain has also has a movie in the works! Soaps.com has learned that Cady with star in “Home Movie”, a documentary style drama/thriller.

The movie centers around a family in turmoil. The Poe family seems to have a picture perfect life but their 10-year-old twins are seriously disturbed – so much so that they do horrible things like stapling frogs to trees! To try to figure out what is going on with the kids, the parents (Cady McClain and Adrian Pasdar) go into their dreams! Sounds like a movie you should watch with the lights on!

The producers of the films are using home-made footage, to add another layer of realism to the film, and traditional movie footage.

Tickets can be
purchased online here for $12.00.

Soaps.com congratulates Cady! We look forward to seeing you on the big screen very soon!

‘Little Voice’ Canceled By Apple After One Season