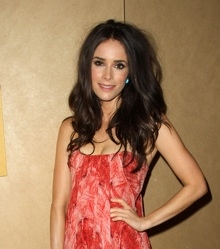 Abigail Spencer (ex-Becca) has been tapped to star in Joss Whedon’s (“Buffy The Vampire Slayer,” “The Avengers”) new project “In Your Eyes.” Per The Hollywood Reporter, the Whedon written and to be produced supernatural romance, follows two people who are polar opposites, yet supernaturally connected. Brin Hill (“Planet B-Boy”) will direct the film.

Spencer played Becca on “All My Children” from 1999-2000. Since leaving the soap, she has kept busy appearing in several TV shows, most recently as one of Don Draper’s (Jon Hamm) love interests on “Mad Men,” as Dr. Jameson on “Hawthorne” and as Alice in the movie “Cowboys & Aliens.” In addition to “In Your Eyes,” Spencer is slated to appear in several movies including “Oz: The Great and Powerful.”

Read about Christina Bennett Lind in Things I Found on Craigslist. Join us on Twitter @soapoperafan, and Facebook. Come tweet and Facebook with us about “All My Children,” all the other soap operas, “Dirty Soap,” “Glee,” “Grey’s Anatomy,” “Vampire Diaries” and “Venice the Series!”

All My Children Video Interview:...

Ex-All My Children's Michael B....