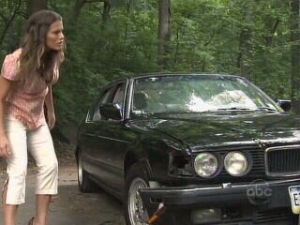 The Randi/Frankie pairing is hot! (Soaps.com)

Well, gang, it’s week two of my new column. It’s been five days of recapping, picture taking and reviewing all of the happenings in and around our favorite city and I have to say, I’m really glad to “see” you all again – because I’ve got some things to say! Remember, the opinions placed below are mine and mine alone. If you agree with me, awesome! If you don’t, that’s cool, too. Agree or disagree, hit the comments area below and we’ll talk a little bit more about what happened, what should have happened or what didn’t happen. Onward, my fellow Pine Valleyites, we have much to discuss.

First and foremost on my mind this week is the children. This is All My Children, right? So where are the kids? We never see Spike or Ian any longer, Jenny makes a quick appearance every few weeks. We actually saw Emma for the first time in weeks earlier this week but she was trotted back to the babysitters just as quickly as she left. At this point ****Spoiler Alert**** I can understand why Kathy is going to revolt against Krystal. Her mother died a year ago, Guardian Julia died just a few weeks ago and she gained a father whom she never sees! I think I’d revolt, too, if I were a five year old kid dealing with such a trunk load of emotional baggage. I say, show us some family time. Real, down to earth family time. Don’t get rid of the adult drama completely but let’s break it up with a little down time for the kiddos. They deserve it!

Speaking of the kids, I was heartbroken to learn that Josh has been backburnered for so long that The Powers The Be have sent the character to Recurring-ville. What a waste of a great actor – and a hunk, to boot! The best way they could save the character? Un-unabort him, prove that he isn’t another child of Erica’s (I mean, really, how could he be?) and get him back in the mix with Tad over the death of Greg Madden. A death that was just kind of glossed over. I’m not in favor of Tad having a dark side but really should he just be let off the hook for that crime?

This Ryan/Annie/Greenlee triangle is really not working for me. I wasn’t a fan of Rylee the first time around and now that I’ve seen Ailee in action, I say give them the SuperCouple moniker and let’s move forward! I know there’s nothing better than a love triangle on daytime television, but the current take on Ryan/Annie/Greenlee/Aidan is missing something. I can’t put my finger on exactly what but I just don’t see that spark that has been there in the past when the writers tried to break someone up. I hear, however, that all kinds of action is going to be headed RyAnAiLee’s way (and Zendall’s, too) in the next few months. So, even though I’m not thrilled to pieces with it, I have to say that I’m willing to wait it out. However, if something doesn’t happen soon – and by soon I mean within the next month – I’m going to have to have a portion of my brain removed.

The story that I am loving right now? Randi and Frankie. I know, hooker-with-a-heart-of-gold storylines have been done over and over on daytime television. I know this one isn’t all that different from past storylines. But the actors playing Randi (Denise Vasi) and Frankie (Cornelius Smith, JR) and Angie (Debbi Morgan) are killing it!

I think Angie's just a teeeensy bit over the top (come on, who didn't think Frankie would see right through her Come-for-Dinner invite to Jill?) and Randi is still a little bit wishy-washy to me, but this week when she actually started to make some plans instead of whining about how rough her life was, I bought into her storyline. And Frankie. . .hey, who wouldn't root for him after that scene with Fletcher (could there be a more slimy pimp?) in the back of the truck. I did want to smack him and tell him to go to Jesse but, hey, where is the drama in running to your parents for every little thing?

This is my minority opinion for the week: I could really start rooting for Ryan again if the writers would give him back the piece of his brain that was obviously taken away with the amnesia storyline. Ryan used to be smart, sexy and hell on wheels. Now he's…well, he's still sexy. His brain, however, has been missing in action for months. Read my lips people, no matter how much Annie is using his guilt against him, the old Ryan wouldn't have bought into her flimsy excuses (when exactly did Annie become a plumber? Not to mention a plumber who needs a pipe wrench the size of Montana to fix a pesky kitchen sink leak?) and he wouldn't have allowed himself to be guilted into getting married again to prove his love!

Would some one please, please, please make Cassandra stop whining? Or better yet, give her a little of Colby's booze. I bet I could root for her a lot more if she were drunk instead of whining about Jesse all the time. Read my lips Cassandra: Jesse isn't trying to railroad you or your friends. He's been trying to help you from the beginning. You're the one messing everything up by not being honest. Argh!!! I really, really, really just want this teen storyline to go away. I don't care about Dre, Cassandra or Colby, not even for the sake of Jesse/Angie or Tad/Krystal/JR.

Oh, and Adam/Jack/Erica? That's a triangle - whether love is involved our not - that I could get behind. This Samuel/Erica/Jack thing is just making Erica look like a silly teenybopper girl; a girl she never really was in the first place. Erica is wonderful to family and close friends; she is vindictive as all get-out to her enemies. Erica would not have forgiven Samuel so easily for throwing her butt in jail. Not even if she knew it would drive Jack crazy.

Speaking of romance, does anyone else think Tad and Jesse are a perfect bro-mance? They are such a great pair, great chemistry and a friendship that really goes go back for years and years. Since Jesse's return, I've loved their silly antics and now that they are investigating together and being a little more serious, I'm loving them even more.

Were those Flower Child Newlyweds funny or what? Sure, they were kind of beating Greenlee and Aidan over the head about getting married, but they sure were cute while they were doing it.

Last line: If Petey is supposed to be bringing the funny back to Pine Valley, he'd better get some funny lines. Right now, he's just a geeky guy following Colby around like a puppy dog. Again, not rootable.

We need rootable, people, not random storylines focused on characters who aren't rooted in Pine Valley or that don't pull together some of the core families.