All My Children Throwback Thursday Poll: When Ethan Confronted Zach 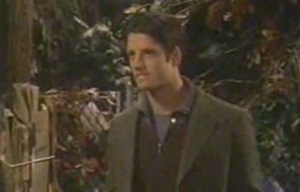 Ethan Cambias came to Pine Valley in 2004 claiming to be the heir of Alexander Cambias Jr. (who everyone thought was dead) and therefore the rightful heir of the Cambias fortune. Upon hearing Ethan’s claims, Zach Slater announced he was in fact Alexander Jr. and had faked his death years ago. However, he denied Ethan was his son, despite secretly running a DNA test that confirmed it to be true.

Unconvinced, Bianca encouraged Ethan to test his DNA against her daughter’s, who was conceived after Michael Cambias raped Bianca. The tests came back positive, proving Ethan was in fact a Cambias and Zach’s son.

On January 12, 2005, after Ethan received the test results, he confronted his father. What did he do? Vote and feel free to discuss what you remember about this storyline below.

Read Soaps.com's All My Children Fan Fiction: Leo Is Alive? Join us on Twitter @soapoperafan, and Facebook. Come tweet and Facebook with us about "All My Children," all the other soap operas, "Dirty Soap," "Glee," "Grey’s Anatomy," "Vampire Diaries" and "Venice the Series!"

All My Children Video Interview:...