All My Children Fan Fiction: Leo is Alive? 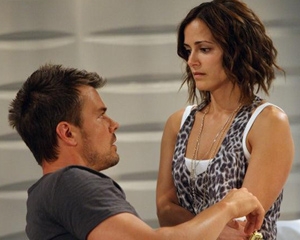 What if Leo really was in David’s vault?

As “All My Children” rapidly sped toward its finale this summer, the suspense of finding out just exactly who was brought back to life by David was electric. Storylines moved at a fast clip, with beloved characters making their way back on set before the end of the show. And once the pancake-poisoned Dixie found her way back to tad, the door was wide open for anyone to return ─ especially Leo du Pres, David’s own brother.

When we last saw Leo, his lifeless body was recovered after falling into Miller’s Falls, battling Vanessa for Greenlee’s safety. Instead of flying off to Paris like they should have been, the couple was ripped apart. Was it possible the love of her life was alive, returned to her by David?

As Greenlee opens her eyes, she could see immediately a figure laying on a gurney. She couldn’t dare to hope, but as she stared at the body she couldn’t stop her mind from racing to the possibility that it was Leo under that sheet. Slowly, she gets to her feet and moves closer. She stops, extends her hand and pulls back the sheet. And here, lying still, was the love of her life.

“Oh my God, Leo,” she says. “It can’t be.” But it is. He is alive and warm and as she stands there, he actually opens his eyes. “Greens,” he whispers to her. “It is about time you showed up.”

“This isn’t real, you aren’t real,” she whispers, hardly daring to believe it could be true. “You died.”

"I guess I am not that easy to get rid of," he replies, and reaches his hand to her face. The moment his skin touches hers, she gasps. It is true. He is really here with her and there is no way she can let him go again. She knows it is nothing short of a miracle that he is right here in front of her, breathing, and she will do everything to be with him forever. She wasted too much time when he was with her before, pretending she didn’t love him. But now, that is over. He has come back to her and that is everything. She falls into his arms and holds tight, Like before, it is a perfect fit.

"I promised I would always be there for you," he says. He leans down and kisses her, and the magic they once had is only stronger now. Ryan may be her husband, but Greenlee knows he can never love her the way Leo can. And she can never love him like she loves Leo. She grabs him tight and kisses him back. If she had any doubts before that this was an illusion, they are gone now.

"We need to find a way out of here," he whispers as he pulls back from the kiss. As fleeting as their reunion has been, he knows they need to get out of the vault if they are really going to be together. He grabs her hand and goes to the door but isn’t sure what to do next. She sees him struggling and begins to feel around the walls. There just has to be a way to open the door. And then, suddenly, it opens. She looks up at Leo and her voice catches in her throat. This is it. Their way out together, and there is no way she isn’t taking it. They grab each other's hand and make their way out of the room, together.