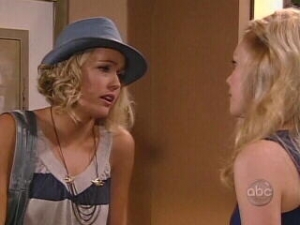 Have you ever wondered what Kristi (that’s me) really thinks about the goings-on in Pine Valley? Wonder no more! This week we’re unveiling a new column here that is chock full of my opinions and thoughts on the week that was in P.V. If you agree with me, awesome! If you don’t, that’s cool, too. Agree or disagree, hit the comments area below and we’ll talk a little bit more about what happened, what should have happened or what didn’t happen. Let’s get to it!

Does anyone else think it is a travesty that Erica was released this week and we still haven’t heard from Bianca? I know Eden Riegel (ex-Bianca) is busy with her new online series and a couple of movies, but couldn’t they at least have had a phone call between Binx and Erica? A short visit? Come on, this is Bianca we’re talking about. She wouldn’t have been able to stay away for the entire prison term!!!

Call me crazy but Crazy-Annie is so much more loveable than Sane-Annie. Sane-Annie could get on my last nerve faster than a duck on a june bug. Crazy-Annie has me rooting for her. Every. Single. Day. I don’t want Aidan to learn her secrets. I don’t want her to leave Greenlee alone (and attacking her in the hospital was priceless!). I want her to drive Ryan stark-raving mad, wreak a little mayhem on everyone who wronged her and generally prove that a woman in Pine Valley can be every bit as wonderfully villainous as a man. Move over Janet, there is someone new encroaching on your territory!

Speaking of Greenlee, methinks she doth state too much that she loves Aidan. I’ve been in love with my husband for ten years and even in the beginning I didn’t feel the need to state, state and re-state just how wonderfully, amazingly, terrifically terrific it was to be in love. Face it, Greens, you don’t love Aidan – you’re just using him because Ryan isn’t available!

Since we’re still skirting around the Annie issue, I really don’t want her sent up the river for killing Richie. I don’t want Cassandra, Colby or Dre to head upriver either…I just want their part of the storyline to stop. Immediately. If they would pay a little frikkin’ attention, they’d realize that even though they did run him over, that act wasn’t what killed him. So get over it already.

Oh, but I am loving Jesse’s investigative skills. Finally, a cop in Pine Valley worth the title of Chief of Police!!

Jack and Erica belong together. The fans know it. The writers know it. They’re the only ones who don’t. So clue them in already and while you’re at it, give Samuel a believable love triangle with Jesse and Angie.

Randi is such a beautiful girl and the actress is great, but I haven't completely bought into her damaged persona. She's too angry all the time to be believable as the hooker afraid of her pimp or the girl who had no choice but to turn tricks. Repeat after me: a person as abused and damaged as Randi hints that she is doesn't have enough self-esteem to be this angry.

Was anyone else laughing out loud at Zach during Erica's impromptu dinner party at the Valley Inn? And while we're at it ladies, if Zach were your husband and said, "Let's blow this pop stand", would you really have wanted to hang out with your mom? I don't think so.

So Colby's an alcoholic. Who didn't see another Chandler kid hitting the bottle sooner or later? Of course, now we can revisit JR's greatest hits…and Hayley's…possibly Skye's…and let's not forget about Adam.

Petey is funny but isn't quite the "Spinelli-light" version he was touted to be. At least not yet. So far, he's just a geeky guy in love with a beautiful girl. But let's delve into that a little more because he's actually really sweet! I'd love to see him with Palmer, Opal and Tad ... and the rest of the Martin clan, too! What a hoot!

Let's get the Tad/Krystal/Adam love triangle heating up. I know Tad and Krystal aren't in love but there is such a history between them (not to mention Tad's history with Adam!) that it needs to be explored and not just skipped over. Krystal is obviously torn between the man she wants and the man she thinks she should want. Tad is busy keeping anything and everything he can away from Adam. And Adam, well, isn't he so much more vibrant any time Krystal is around? Yeah, I think so, too!

My final thought on this week? I really like the way most of the storylines are coming together. None of the characters are entities unto themselves; the entire town is getting involved, which is what I really like from a daytime drama. High energy, great storytelling. I think we're headed in the right direction. How about you?

All My Children's Eden Riegel Makes...