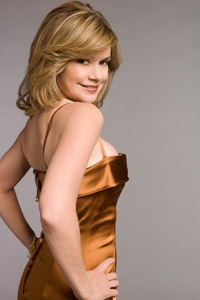 Love her or hate her, Krystal Carey Chandler Martin isn’t going anywhere any time soon. She is currently embroiled in a love triangle with ex-husband Adam and semi-in-name-only-husband Tad, has taken on the mothering of 5-year-old Kathy and is also playing spy-games with Adam Chandler. All of that and she looks great, too!

I recently had the chance to chat with Bobbie Eakes about the role of Krystal and learned some very interesting things about Krystal’s future – and that of Bobbie, too! She is currently in rehearsals for the “Divas of Daytime” show; you can read about that by clicking here . Bobbie is also dealing with a high-octane storyline in Pine Valley; read on for our Question and Answer session!

Kristi: “2007 was a roller coaster for Krystal – she lost her husband, gained a baby girl, nearly lost Babe and then married her friend Tad. What is it like to have such an emotional storyline to play?”

Bobbie: “I truly believe we, as human beings, are highly effected by what we focus on. As an actor it is really hard to separate yourself from those mental issues, so I make a real conscious effort to have a full life outside the show because it has been very emotional. It’s been tough but it’s very fulfilling as an actress.”

[Editor’s note: with the debut of “The Dark Knight”, Heath Ledger’s last film, we talked about the stresses of highly emotional stories. Bobbie said it is important to separate yourself from the work from time to time.]

Bobbie: "I really feel badly for people like Heath Ledger. You know those emotions, when you're playing a role that is so dark, if you have any tendency toward depression you have to be very careful. You have to make your life fulfilling outside your work. I'm nowhere near that type of personality but you have to find something else to focus your mental energy on."

Kristi: "Fans are really divided - about half want Krystal to leave Adam in the dust and the other half want her to give him another chance…what do you think Krystal should do?"

Bobbie: "First of all, I love that they [the fans] are divided because it makes for the best story! And Krystal's divided, that is what I'm playing and how she feels. I really don't know who she should be with! She is still trying to figure it out. She's in a little better than platonic relationship with Tad, she loves him but it's nearly brotherly [Bobbie laughs] and she has real passion for Adam but there are so many dysfunctional aspects to that relationship. She's got a lot of soul-searching to do!"

Kristi: "I’ve heard stories about Michael Knight’s pranks … so I’m sure you guy laugh a lot! What are some funny things you do to break up the day?"

Bobbie: "I've pranked him more than he's pranked me! Everything that comes out of his mouth is some clever witticism, he's one of the smartest people I've ever known! He is generous to a fault, every time he comes to work he has something to give to people - and there is always a variety of things to choose from. The stuff that makes me laugh the most are the things he comes up with while we're filming. He does a little improvising and it just cracks me up. If it's pertinent to the scene, I'll let myself laugh. [For her pranks against Michael] I'll put little articles or things up on his dressing room door, (laughs) but I can't remember some of the things I've done. We just have a really lovely relationship. It's like a dorm over there!"

Kristi: "Without giving us the exact details, because I know you can't, are there any teasers you can share about Krystal?"

Bobbie: "There are some challenges [coming up] with Kathy but it goes beyond what most step-mothers have to face. Little Kathy has some biiiig issues with Krystal; I'm really enjoying it. I'm so pleased with Alexa's work. She is six years old and she has to do a whole lot of grown up story and she's going a fabulous!"

This isn't the end of our Q&A session. Stay tuned fans, we'll have more with Bobbie Eakes in a few days when Bobbie will answer a wardrobe question and we'll find out what it's really like to work so closely with all those kiddos on All My Children.