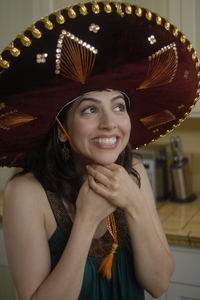 All My Children’s Eden Riegel (Bianca) hasn’t let any grass grow under her feet since leaving Pine Valley last spring. In addition to a few cameo appearances, Eden has begun her own Internet series called “Imaginary Bitches” (you can read about that here), finished taping a movie with Jack Black called “Year One” and is now set to co-host a new online cooking show with Bob Guiney! I had the chance to chat with Eden recently and she told me all about Bob, the online series and her hopes of a Pine Valley return!

Kristi: “Hi Eden, first of all, tell us about the new show!”

Eden: (laughing) “It’s a show designed for dumb guys who don’t know what they’re doing in the kitchen and haven’t cooked anything beyond a Pop-Tart. It will show them how easy, fast and fun cooking can be to impress their dates – and hopefully get luck!”

Kristi: “So the idea is to demystify the kitchen. What types of dishes/recipes can we expect to see prepared?”

Eden: “Simple but impressive dishes. [Meals] designed to be accomplished quickly. . .are usually casseroles or things that aren’t very sexy. Our food is very sexy and makes it look like you’ve been at work on this for a while. We even talk about fun drinks you can serve and there are quick tips, too, to show bachelors how to gussy up their tables. And, guys can submit video pleas for help on unique dating situations and we can help them out by answering their questions. From a date with a girl who is really into healthy eating to how to set up that first at-home date.”

Kristi: “You co-host with ‘Bachelor Bob’ – now married to AMC regular Rebecca Budig – what is it like to work with him?”

Eden: “He is hilarious! Bob (giggles) keeps me laughing all the time! He is so fun to work with and this show sort of unleashes his personality. In this case he is playing Everyman, the guy who has no idea what a frying pan is, but he is charming and delightful. If I can teach him to make something, I know it’s something that anyone can accomplish!”

Kristi: “Give us the details: show length, airdates and how many episodes have been taped?”

Eden: "The first episode goes up July 28 and they are five to seven minutes each. We have five episodes in the can and hope to do more!"

Editor's Note: You can watch the episodes, submit your dating questions or get recipes by clicking here.

Kristi: "How did you come up with the concept?"

Eden: "Andrew (Eden's husband) came up with it and actually perfected it by the time he met me! I came over for dinner after we'd gone on a couple of dates and he had the whole nine yards. It looked like he'd been working the whole day and it was very thoughtful. I knew I had a catch! So, he has this arsenal of easy recipes and we both added to it and adapted recipes for the show."

Kristi: "You've kind of become the queen of the online series with the series and the cooking show. Is it fun to spread your wings a little this way?"

Eden: "It's so fun! I've always loved cooking and I'm a huge cooking show addict. I always thought it would be fun to have my own cooking show, so this is the perfect thing! We have such a great time doing the show and it's more than cooking, it's a comedy. Bob and I have such a great time and the Internet is a great way to explore these ventures. I'm working with family and friends so it's a family affair. The beauty of the Internet is that it affords you a lot of control and you can work with people you absolutely adore! That is living the dream!"

Kristi: "We spoke about the "Imaginary Bitches" project a few weeks ago and you mentioned a possible second season … is that still in the works?"

Eden: "I wish I could announce the good news but it is still up in the air."

Kristi: "Okay, time for some Bianca-talk. We are more than half-way through Erica's prison stint, she's up for early release and still no Bianca! Are there any plans that you know of for a guest appearance? Or even bringing Bianca back for a long period of time?"

Eden: "I’m always talking to the show and I hope I get there before she's out of prison! It's terrible that it's been six months and no Bianca!"

Soaps.com hopes Eden will get to return as Bianca soon - we miss her on the show! It was wonderful to catch up with Eden about life after Pine Valley. We wish her the best of luck with her new shows!

All My Children's Jacob Young To Be...