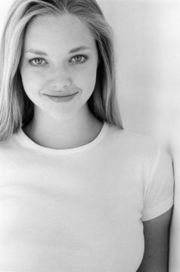 Just in case you’ve been living under a rock this summer and hadn’t noticed, the music of 70’s Swedish supergroup ABBA is reigning supreme again, thanks to a little movie starring Amanda Seyfried (ex-Joni, AMC, ex-Lucy, As The World Turns) and Meryl Streep.

“Mamma Mia!” hit’s theaters Friday, July 18, 2008 and promises to be a romp of a romantic comedy. Amanda’s character, Sophie, just wants to get married and have her father walk her down the aisle. The problem? She has three possible fathers! Seems Sophie’s mom, played by Meryl Streep, had a bit of a wild childhood herself! When her three possible fathers arrive for the wedding celebration, Sophie is forced to choose what really matters – getting married with friends and family around or breaking two potential fathers’ hearts.

The movie also stars Meryl Streep, Pierce Brosnan, Stellan Skarsgard and Colin Firth. By the way, Amanda isn't just acting in the film - you'll hear her sing, too! She performs several ABBA songs on the movie soundtrack including "Mamma Mia", "The Name of the Game" and "Honey, Honey".

For a short time, Amanda was a teen queen of soap operas. As All My Children's good-girl Joni, Amanda was a fan favorite for a short time. Her role on the soap ran from 2002 - 2003. Before joining the cast, she starred on As The World Turns as Lucy Montgomery.

Since leaving the soap world, Amanda has made a name for herself in television and movies. Some of you may remember her as the dingy blonde Plastic in the Lindsey Lohan hit "Mean Girls" a few years ago; she also played Sarah in the HBO series "Big Love" and Lilly Kane in "Veronica Mars.

"Mamma Mia!" is the first movie that she will headline and we're certain it won't be the last!

Soaps.com congratulates Amanda on her new role and we wish her the best of luck!

Is All My Children's Ryan Best with...

Eden Riegel Talks To Soaps.com About...