All My Children Poll: What Happened To Erica? 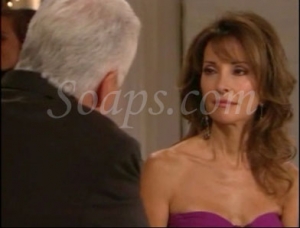 After shots rang out.

Since All My Children is not migrating with Prospect Park we may never know what happened after shots were fired at the Chandler mansion. While many fans are with MissChef in wanting ABC to deliver a real ending, it doesn’t look like that will happen anytime soon, so Soaps.com asked our readers on Facebook and in our All My Children message board what they think happened to Erica after shots rang out.

AMC Life thinks she went to Hollywood: I also think that she would have had an affair with ‘Mr. Peterman’. It seems to be her style, use a man & toss him aside when she’s ‘done’ with him. Erica is all about Erica.

Levann: Erica was shot by JR. Her life hanging in the balance, she proclaims her love for Jack and they agree to marry. Later on they decide that she can have the movie made without being in it but retaining creative control. There was really no reason that Jack and the movie were mutually exclusive in the first place.

AJErickson01: I think Erica would have made it out the door and someone else got the bullet instead.

IngaOlaf: She was eaten by a rat. [Later added…] A rat who used to be a mouse – then known as Mickey.

Lynn R.: After being in jail, hanging from a building, confronting a bear, in a burning building, hurricane, shot & stabbed, been in a airplane crash, she finally freakin dies! RIP.

Bobbie W.M.: She realizes her love for Jackson is real. Like the real love of a good friend. There is no fire, no sparks, no passion. On the plane to Hollywood she meets the love of her life, Demetri Merrick. He convinces her to spend the weekend with him on his secluded island. She could not resist his invitation. She knows she has always loved him, and just realized how much she missed his strong masculine raspy voice.

Shirley A.: Well I am sure she missed the fate of death again as JR stood between the walls with a gun. She is most likely with Jackson and off enjoying life in her elderly years. Being through all the near death situations has probably taken a toll on her!

Linda W.C.: She marries Jackson and they live happy ever after.

Do you agree with any of these scenarios or do you have your own version of what happened to Pine Valley’s beloved heroine? Or are you with Debbie H., Maryann B., and Marie L., who just want to let it go? Vote in our poll and comment below.

All My Children's Susan Lucci Back...