Is All My Children’s Ryan Best with Annie or Greenlee? 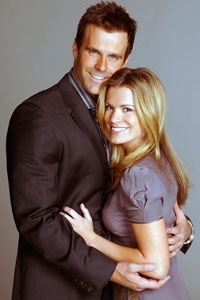 Fans have been clamoring for it for months – Ryan has finally regained his memory! But, the big reveal that Ryan remembers everything from the past four years isn’t exactly what many fans had hoped for. Rather than Ryan simply moving forward with Annie and his family, Ryan has realized that Greenlee was the reason he couldn’t regain his memory for these past few months.

Ryan, it seems, is in love with Greenlee and always will be.

Although Annie doesn’t know it yet, and neither does Greenlee for that matter, the revelation is sure to set tongues wagging in and out of Pine Valley!

At Soaps.com, we like the intrigue and the ins and outs of on-screen romances as much as anyone, but we thought we would ask the question: Which woman is Ryan’s true soul mate?

Remember in the beginning, Ryan was really just a toy for her. Greenlee wanted him but he was with Gillian. When they finally did get together, it was a friends-with-benefits thing, but the did wind up falling in love. Through it all there has a been a bit of a triangle with Kendall. She had Ryan first, she wanted Ryan first but Greenlee was the one who wound up with him.

Greenlee fooled Ryan by taking his sperm from a sperm bank after he faked his death. Then he came back from the dead and decided he wanted her. What she wouldn’t fall in line, Ryan continued on with his life – and having a child with Kendall.

Annie, on the other hand, was Ryan’s friend first. She wasn’t interested in romance at all because of her ex, Terry. Ryan decided he wanted her, however, and wouldn’t take no for an answer. He wheedled and flirted until Annie’s resistance was low. And then he swept her off her feet.

He has protected her from the beginning but Annie hasn't been completely truthful with him. First we learned that she had a dysfunctional family in Chicago, complete with a psychotic brother and now Annie is keeping the truth about Ryan's vasectomy from him and trying to get pregnant. Sounds like a Greenlee plan to me!

So does Ryan belong with Annie or with Greenlee?

Whatever the case, not everyone is thrilled that he’s done an about-face and is now in love with Greenlee.

Here is what a few fans from our message boards have had to say.

Ms.JesseHubbard said, “I don’t want Greens with Ryan, it’s too old. I think Aidan and Greens should stay together and work things out.”

“I want Ryan and Greens together,” said Lofono1025. “It would be funny if Annie and Zach got together and Aidan and Kendall got back together.”

“They [Ryan and Greenlee] are such a great couple!” said Jasam-4-Life.

Ryan has said since falling for Annie that she was exactly the kind of woman he wanted: she didn’t play games, she was interested in family life and she didn’t have ties to the rest of Pine Valley. Why, then, does Ryan all of a sudden want Greenlee again?

Was he only fooling himself by starting a romance with Annie? Was he trying to push Greenlee out of his mind by creating a relationship with Greenlee’s opposite?

What do you think? Comment in this article or take your comments to the boards - let’s figure out who Ryan’s real soul mate is!

All My Children Wardrobe Questions...