Interview: All My Children’s Bobbie Eakes 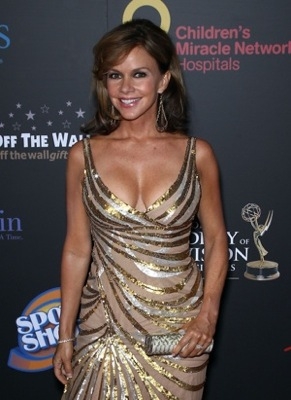 “I always love an opportunity to sing and especially if it’s for a good cause.”

While it remains to be seen if we’ll ever see Bobbie Eakes’ Krystal in Pine Valley again, the actress will be performing in Palm Springs, CA at Sparkle: An All-Star Holiday Concert on December 7. Produced by Scott Nevins (who will also host) and Mark Jones, Sparkle benefits Desert AIDS Project, which has provided direct medical and support services to HIV-affected adults and children since 1984.

Soaps.com recently talked with Bobbie about the event, as well as All My Children not migrating online with Prospect Park.

Eakes’ involvement in Sparkle came about after doing a few events in Palm Springs and meeting Scott Nevins at an event she sang at in Los Angeles. “I’ve done a few things for the Desert AIDS Project. It’s a charity, it’s one of my favorites and I love what it does and I love the people involved, so Scott asked me to be part of it,” she said, adding, “I always love an opportunity to sing and especially if it’s for a good cause.”

Bobbie, who will perform “Have Yourself a Merry Little Christmas,” shared, “It’s a song I’ve done on Christmas albums before. It’s one of my favorite holiday songs. I’ll just be doing the one song. There’s quite a few people that are going to be performing. It’s going to a really great show with lots of variety and lots of talent.” That talent will also include Broadway and TV stars JoAnne Worley (“Laugh-In”), Wilson Cruz (“My So Called Life;” “RENT”), Von Smith (American Idol), Erin Quill (“Avenue Q”) and others.

As for her thoughts upon getting the news that “All My Children” and “One Life to Live” were not migrating online after all, Eakes reflected, “Well, at that point, I had my doubts already so I wasn’t completely surprised. They were kind of chipping away at what they originally came to us and told us a few months ago. Things were getting chipped away at over the past few weeks so when they came out and said neither show was going to go online, I wasn’t completely surprised. They told us they were going forward with “One Life to Live” and they were going to bring us on later and that’s when I started having my doubts. I think what happened was they had all these grand ideas and I just don’t think they had their financing together, as together as they made it sound. Unfortunately, they went to the press and said it was because of negotiations with the unions and that’s not true. A lot of the newspapers in Hollywood have gone back with rebuttals because that’s really not what happened. I think they bit off more than they could chew. I hope it does happen. I know that’s where all television is going in the future. It’s all going to be Internet based. We’re going to be watching all of our shows that way in the future, it’s just a shame it didn’t happen with our show because it would have been really great to be part of a really groundbreaking phenomenon. And maybe it will happen…but for now everyone is just looking to do other things and that’s showbiz.”

While Bobbie was all for joining "All My Children" online, she feels for the viewers when it comes to the cliffhanger ending. When asked if she knew how the original ending was scripted, she replied, "That's a good question. I might have to give Agnes Nixon a call. That's a real drag for the viewers that we completely revamped our ending so that it would be a cliffhanger and it really shorted the audience because now they're left with a big question mark. No, I don't know what the original plan was. I'm sure it was going to be a lot more upbeat and positive and tie up forty-something years of 'All My Children' with a big pretty bow. The audience was cheated out of that unfortunately. Like I said, I might have to call up Agnes and say, 'What would you have done?'"

Asked what she would like to have seen for her Pine Valley alter ego, Eakes responded, "I certainly didn’t want to be one of the dead people. [laughs] I would have liked to have seen a little bit of a romance with Jack. I do think that's what Agnes was writing. I did hear that from people that talk to her all the time. She was continuing on with an Erica [Susan Lucci], Jack [Walt Willey] and Krystal storyline from what I understand. So that would have been a lot of fun. I love working with Walt Willey."

In fact, Walt and Bobbie are working on putting together a cross-country tour featuring his stand up comedy and her music. She also has plans to continue touring with Divas of Daytime, which teams her up with "One Life to Live's" Kassie DePaiva (Blair) and Kathy Brier (Marcie), once Brier is ready to return from maternity leave.

In the meantime, Bobbie can be seen at Sparkle: An All-Star Holiday Concert, which will be held at the Annenberg Theater inside the Palm Springs Art Museum. For tickets go to Sparkle Palm Springs.

All My Children's J.R. Martinez...

All My Children's Susan Lucci Back...