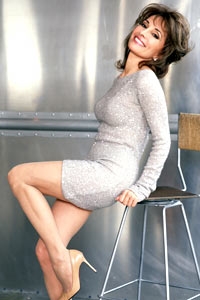 Susan came in third! You can see Celebrity Jeopardy during the week of November 8.

� “La Lucci” (as her friend and occasional co-star Regis Philbin calls her) is taping “Celebrity Jeopardy” this week at Radio City Music Hall. The episodes are scheduled to air the week of November 8. Other participants include Philbin, Bebe Neuwith and Martin Short.

� If you’re planning to send Susan Lucci (Erica Kane�but if you’re an AMC fan, you know that!) a Christmas gift, make it a combo birthday/holiday gift. The seemingly ageless doyenne of daytime turns 60 on December 23.

� Kelly Ripa (Hayley Vaughn Santos, 1990-2002) and Mark Consuelos (Mateo Santos Sr., 1995-2002), met, fell in love and married while starring on AMC. Now they're going to be playing husband and wife soap stars in an as-yet untitled comedy for the new CW network.

The Night "The Streak" Ended