All My Children’s J.R. Martinez’s Week Nine Dancing With The Stars Video. (Updated.)

Before J.R.'s Argentine Tango, a friend and family clip package played with his mother, his girlfriend, Cameron Mathison (Ryan), Bobbie Eakes (Krystal) and Susan Lucci (Erica) talking about his incredible spirit and ability to do whatever he sets his mind to. After the dance, the usually upbeat and smiling J.R. looked angry, but was probably just in pain. However, the judges enjoyed his performance. Bruno told him he did an incredible job and the sexual charge between him and Karina was wonderful. Carrie Ann thought they had a great connection and praised him for the lifts. Len also had glowing things to say about the dance. J.R. received three 9s from the judges.

For the cha-cha relay, each couple danced a portion of one dance, one right after the other, for extra points. After deliberating, the judges gave Hope and Maks 4 points for fourth place, J.R. and Karina 6 points for third place, Ricki and Derek 8 points for second place and Rob and Cheryl received the top spot with 10 points.

Overall, J.R. and Karina landed in third place with 56 points trailing Rob & Cheryl and Derek & Ricki. Since Hope and Maks landed in the bottom spot, could this be the end of the line for them? Who do you think will go home tomorrow night?

Relive J.R.'s week eight instant jive. Join us on Twitter @soapoperafan, and Facebook. Come tweet and Facebook with us about "All My Children," all the other soap operas, "Dirty Soap," "Glee," "Grey’s Anatomy," "Vampire Diaries" and "Venice the Series!"

A week of three dances.

Despite landing in jeopardy, J.R. and Karina made it through another week and are going to the “Dancing with the Stars” finale. Unfortunately the same cannot be said for Maks and Hope, who were eliminated. Tune in next week to find out if J.R. and Karina will win the coveted mirror ball trophy or if it will go to Ricki and Derek or Rob and Cheryl. Who do you think will win?

The semi finals consisted of two individual dances and a cha-cha relay for each of the four finalists. J.R. and Karina’s individual dances were the Argentine Tango and the Paso Doble, but unfortunately, J.R. twisted his ankle during rehearsal, hindering him a bit.

For the Paso Doble, J.R. and Karina danced to a song from “Mask of Zorro.” The crowd went wild for him, but he hurt his ankle again during this first dance. Bruno told him he felt the thrill and excitement of the role playing. However, his posture wasn’t quite there. Carrie Ann gave him a lot of credit for attacking the intensity of the dance with a twisted ankle, but she felt it affected his posture. Len didn’t think the dance suited J.R. also noting his poor posture. Carrie Ann gave him an 8, Len a 7 and Bruno an 8. 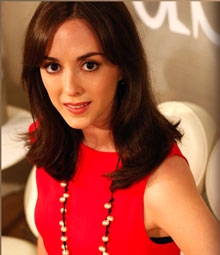 All My Children's Christina Bennett Lind In Twelfth Night