All My Children’s Cameron Mathison In Mary Poppins. (Video Update.)

Per Theatre Mania, Cameron Mathison (Ryan) had a cameo role in Broadway's "Mary Poppins" on November 2. He was the first non-cast member to attempt the character Bert's proscenium walk.

Mathison's performance will be shown in a "Good Morning America" segment in honor of the show's fifth anniversary. It will air on November 7 at 7.00 AM EST on ABC. As pictured in the photo, Susan Lucci (Erica) greeted her "All My Children" co-star backstage.

Find out where you can meet Pine Valley's Hottest Stars. Join us on Twitter @soapoperafan, and Facebook. Come tweet and Facebook with us about "All My Children," all the other soap operas, "Dirty Soap," "Glee," "Grey’s Anatomy," "Vampire Diaries" and "Venice the Series!"

Watch Cameron’s behind the scenes rehearsal and Broadway debut in “Mary Poppins” in the video below. 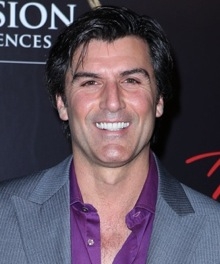 All My Children Stars At Clearwater Country Club

All My Children's J.R. Martinez's Dancing With The Stars Week Eight Video. (Updated.)