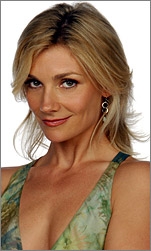 All My Children has announced the first airdate for Beth Ehlers, who originates the role of Taylor McBride this summer. Beth, as Taylor, will begin airing on the show July 24, 2008.

The character of Taylor is an Army officer who served in Iraq. The character is said to have a history with Ricky Paull Goldin’s Jake. The question many fans are asking is with her history in Iraq, will she also be acquainted with Frankie Hubbard? We’ll have to wait and see!

In the mean time, Soaps.com welcomes Beth to Pine Valley. We can’t wait to see you on-screen!

Later this summer, a new face is going to hit Pine Valley but many of you may already be familiar with her. Beth Ehlers, ex-Harley, Guiding Light will take on the role of Taylor, an Army lieutenant who has a definite reason for coming to town!

Rumors have been swirling around the Internet for months that Beth would follow Ricky Paull Goldin, Jake, from their old haunts in Springfield to the unfamiliar territory of Pine Valley and several new faces. The show officially announced the casting coup at Friday night’s 35th Annual Daytime Emmy Awards.

Beth said, during an interview with Cameron Mathison, “I am so thrilled! It’s going to be a good time!”

Well, a few days have passed since the big announcement and word is now beginning to trickle down about Beth’s character of Taylor.

When she arrives in Pine Valley, little will be known about Taylor McBride other than her past military history. Soaps.com has been able to confirm that Taylor is an Army Lieutenant and she is a veteran of the Iraq war. During her stay in Pine Valley, Taylor will be distracted from her purpose. Will she be a long-term addition to AMC? Will she have a history with Jake? Or, since she served in Iraq and we know that Frankie served in Iraq, will her connection be with him? That remains to be seen, but we sure hope so!

Beth and Ricky had amazing chemistry when starring on GL and that chemistry is exactly what is needed in Pine Valley right now!

Soaps.com welcomes Beth to Pine Valley! We hope you're here for a long, long time!

All My Children Song Questions...

All My Children Wardrobe Questions...