All My Children’s J.R. Martinez’s Week Four Dancing With The Stars. (Video Update.)

What's your favorite dance of theirs so far? Comment below.

Donning a fake mustache and pink coattails, J.R. brought his usual charm and confidence to the routine. However, Carrie Ann apparently didn't see it that way as she thought the dance fell a little flat. She told him he didn't need all the humor he added. Len was incensed by her critique calling J.R. the best male dancer of the night. He thought J.R. added just the right amount of humor and called the routine fabulous. Bruno told J.R. he could do it all. He's great. Carrie Ann gave J.R. an 8, while Len and Bruno both awarded him a 9.

With an overall score of 26, J.R. and Karina once again landed just below leaderboard toppers Ricki Lake and Derek Hough, who received the first 10s of the season for their impressive tango to the "Psycho" theme. For the full recap go to Soaps.com's sister site Reality TV Magazine at Mirror Ball Collides With The Silver Screen.

In case you missed it, watch J.R. Martinez's week three rumba. Join us on Twitter @soapoperafan, and Facebook. Come tweet and Facebook with us about "All My Children," all the other soap operas, "Dirty Soap," "Glee," "Grey’s Anatomy," "Vampire Diaries" and "Venice the Series!"

During the results show, it was revealed that J.R. and Karina will continue on to week five of “Dancing with the Stars.” Chynna Phillips and professional partner Tony Dovoloni had the lowest overall combined score and were eliminated. Tune in next week for 80s week!

In case you missed J.R. and Karina’s foxtrot last night, or just want to relive it again, check out the following video. 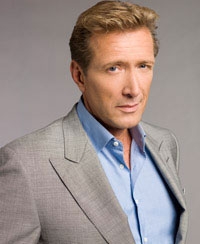 All My Children's Walt Willey At Wiley's Comedy Niteclub